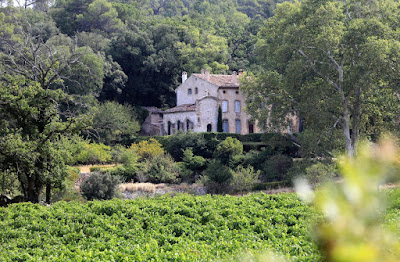 George Lucas is really enjoying his retirement and let's be honest, he deserves to.  The Star Wars creator or more specifically Skywalker Vineyards has recently bought a vineyard and estate in France just a stone's throw away from Bradd Pitt and Angelina Jolie's Château Miraval.  The new venture for Mr Lucas is Château Margüi in the commune of Châteauvert.

The estate reportedly cost $11.2 million and is a nice 115 hectares, with 15 being allocated to vineyards.  Could we see a French Skywalker Vineyards 2018 vintage to compliment the wines from California and Italy?  It seems we will as the Skywalker Vineyards website has already added a message welcoming Château Margüi to the family.  Lets hope the terroir produces some outstanding wine.  According to the press release below it seems it is.  Time will tell.

The local paper, Var-Martin is reporting that George Lucas also has plans to add a small hotel and planning permission has been granted.  I look forward to my invite.

Skywalker Vineyards welcomes Château Margüi to its portfolio of exclusive vineyards and wineries around the world.

Driven by a vision for creating unrivaled wine experiences, and a passion for world-class wines, Skywalker Vineyards has acquired Château Margüi, an estate winery in the heart of Historic Provence, France. This Estate, which dates back to Roman times, embodies the Skywalker philosophy of land stewardship and, respect for terroir, which are characteristic of other Skywalker properties around the world: Skywalker Vineyards in Nicasio, California, and Il Convento in Umbria, Italy (acquired in 2007).

“We are excited to include Château Margüi among our exclusive wine properties. It is the perfect complement to our magnificent Italian Estate and the scenic Skywalker Vineyards in California.” – Angelo Garcia, President of Skywalker Properties, and Lucas Real Estate Holdings

Château Margüi is located in the picturesque region of the southwestern Bessillon mountain range, where the Argens river digs deep into the canyon of Vallon Sourn, an area characterized by rolling hills, meandering vines, centuries-old tree-lined avenues and natural springs. The land surrounding the elegant 18th Century château is rich in agricultural heritage, and boasts just under 40 acres of vineyards, along with a 7-acre olive grove, surrounded by more than 200 acres of forest.

The hills, swept by the local Mistral, a cold wind that blows through the Rhône valley and southern France into the Mediterranean, provide an ideal microclimate for grapes: progressive ripening, along with wide thermal amplitudes. The later harvest highlights the authentic aromatic expression of the terroir.

Imprinted with the same integrity and excellence as other Skywalker Vineyards’ endeavors, and crafted with respect for the tenets of organic cultivation, Château Margüi wines are the culmination of a commitment to old-world winemaking, along with years of meticulous land stewardship. The vineyard plots are AOP Coteaux Varois en Provence classified, and strict vine species selection, soil preparation, and plantations are made in accordance with Organic Agriculture criteria.

“In addition to wine-making evolutions, tradition remains important, as we dedicate ourselves to reproducing the biodiversity, stability and resilience of our natural ecosystem, with respect for our terroir.” —Philippe Guillanton, Château Margüi Winery Manager