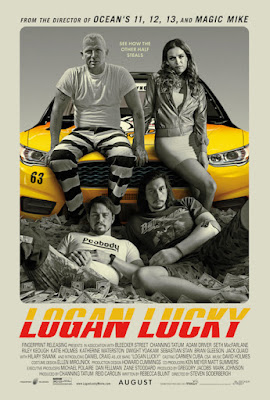 
Steven Soderbergh's Ocean's 11 is was one most the most utterly satisfying and entertaining films of the early 2000's, and a big part of that came down to the simple fact that you had a group of tremendously talented people getting together to have a fun time telling a really solid story. The solid story part was what was missing from Ocean's 12 and 13, though both films had enough going for them to be enjoyable. But those films lacked any sense of passion, and were simply obligatory Hollywood sequels. But with Logan Lucky, Soderbergh has made a near perfect mirror image companion piece that's as blue collar/white trash as Ocean's was glitz and glamour. It can almost be called an unofficial spin off, and in many ways plays best if if tmyou think of it in those terms.

Jimmy Logan (Channing Tatum) was once a very promising football player whose  career was cut short by an injury before it even truly began; Jimmy's brother, Clyde (Adam Driver) is an Iraq War veteran who lost part of his left arm. Rumor has it that there is a "Logan Family Curse", and  Jimmy's status a loser is only reinforced by the fact that his ex-wife, Bobbi Joe (Katie Holmes) has a new husband who is the wealthy owner of a car dealership. The only thing Jimmy has is his daughter, and when he learns that Bobbi Joe is planning on taking the girl to live in Lynchburg, that complicates his ability to spend time with her. But when Jimmy is laid off from his construction job at the Charlotte Motor Speedway due to liability issues regarding his permanent limp, that is the final straw.


Jimmy talks Clyde into joining him in a desperate scheme: using his knowledge of the Speedway's new pneumatic system for moving money, the two will access the system during an upcoming car show, when security is lax, and siphon off the money. The brothers, and their little sister Mellie (Riley Keogh) decide to recruit Joe Bang (Daniel Craig, a celebrated safecracker, to help them execute the caper.  The problem is that Joe Bang is currently incarcerated. But that's only half the problem: due to construction being finished ahead of schedule, the timing of the heist has to move up a week, to the day of the Coca-Cola 6000 NASCAR race on Memorial Day Weekend.

The cast all show up in top form: Tatum has put on weight for the role and donned a very convincing low key southern accent, and is a far cry from the pretty boy non actor he once was, really making the most of his character. But he is overshadowed by Driver, who makes his every line hilarious without even trying, giving a performance that is going to rank as a genuine classic in his filmography. The two have terrific chemistry and are irresistible to watch, and the trio of the brothers and their sister are truly endearing (Keogh makes a very strong impression.). Add to that a wonderfully silly comic turn by Daniel Craig in a role that's a total 180 from James Bond and full of scenery chewing fun without ever being too much, and you have a great recipe for fun, even before you add all of the other great ensemble turns ranging from Seth McFarlane to Hillary Swank. The standout may be the always reliable Dwight Yoakam as the Prison Warden, though that is is in no small part to him being given the funniest scene of the year so far.

The clever script (credited to Rebecca Blunt, though there has been a good deal of talk that no such person exists and it is a pseudonym) is as smart as it is whimsical. And Soderbergh has wisely embraced the Ocean's feel, bringing back composer David Holmes going for the same feel all around, while adding enough freshness to give it a solid life of its own, including some very genuine heart added by the relationship between Jimmy and his daughter (Farrah MacKenzie.). Soderbergh the cinematographer and editor also brings his A-game, whatever names he is using on the credits.

Logan Lucky is the perfect lightweight buffer between the summer action blockbusters season and the more serious fare of the fall season. It may not be a truly great film, but it's a very good one, and if it's not on your must see list, you're missing out.