Movie Review: "The Dark Tower: Plays Like A TV Series Pilot, But Idris Elba Delivers Like A Big Screen Superstar 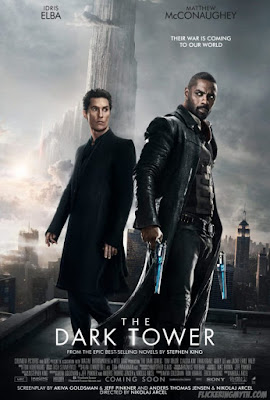 
Matthew McConaughey set out across the desert, and Idris Elba followed. That, in a nutshell, is what the film adaptation of Stephen King's The Dark Tower gets gloriously right.

In fact, one whole star of this review is for Elba. His Roland of Gilead is like Hugh Jackman's Wolverine in the first X-Men - he's instantly definitive in the role, and leaves the feeling that it's just going to get better as we see more - and whatever complaints you may have with the film, he kills with his heart.

It's also important to note that any blame for the film's many shortcomings that will be thrown at Executive Producer Ron Howard and writer Akiva Goldsman (who largely originated the big screen version of Stephen King's epic series) is terribly unfair. Howard's visionary approach to the project, back when he was developing it as something he would direct, was so epic that it made Peter Jackson's Lord of the Rings trilogy almost look small by comparison. His plans involved multiple films and a television series that aired between films, with a budget to match the scale of what fans would expect, and it is the failure of Sony and other studios to recognize the potential for something that could have been part LOTR, part Marvel style shared universe and part Game Of Thrones. Whether it would have been a gigantic cash cow or a studio killer is something we will never know, but it cannot be said that it was Howard that lacked appreciation for the scope of the material.

The film follows Jake Chambers (Tom Taylor)  an teen who is having intense dreams of strange places, a man dressed all in black, and a mysterious gunslinger. Jake's father died, and he lives with his jerky, bearded stepfather and his almost unreasonably hot Mom (when Mom first appears after Jake awakens from a nightmare, there is a second of "what is Kim Bauer doing in this dream? Is there a cougar trap in his bedroom?"). Stepdad wants to send Jake away to insane asylum/boarding school because his drawings of Matthew McConaughey look like a young Kurt Russell (Okay, we made that but they really do), but when Jake tries to run away, he finds himself transported to a desert like world, where he meets Roland (Elba), the Gunslinger from his drawings. He soon finds out that the Man in Black (McConaghey) is real, too.  It seems that Jake has seen all of this because he possesses "the shine", which may sound familiar if you are a Stephen King fan.   .

The movie is too rushed and too be entirely coherent to those completely unfamiliar with the material, but die hard fans who are expecting to see the books translated to the screens are even harder to win over. That leaves a very narrow niche of people who have a passing familiarity but don't  know it well enough to be too easily alienated the changes, and that is hardly enough to make it a hit. The best comparison would be Ralph Bakshi's animated The Lord of the Rings from 1978: not nearly the cinematic urine stain that it has been made out to be by the most zealous of Tolkienites, but nevertheless a jerky highlights reel without an ending. It also plays a bit like The Matrix by way of a number of mid level '80's fantasy movies.

As previously stated, Elba is terrific, and if you took him away, the movie probably would fall completely flat. McConaughey is quite good in his villainous role, even if he plays a little like the Goblin King from Labyrinth as portrayed by Johnny Cash. Tom Tyler does well as Jake, though the character is a pretty cookie cutter fantasy story kid (and quite a bit different from the Jake Chambers fans of the novels know.). Director Nicolaj Arcel does a capable job, though there is a bit of the choppy feel of a movie that executives felt needed to shorter. The major failing of the film is not so much that it's not a perfect point by point recreation of the books as that it's far two truncated to fully capture the grandeur and surreal fantasy of King's work, and that the relationship between the Gunslinger and the Man in Black doesn't have the emotional weight it should (though this is no fault of the actors, who really are perfectly cast.). Its major success is that it's still a unique fantasy film that gets to be a lot of fun about halfway through its second act (and when Tom "Kunkie XL" Holkenbourg's score kicks into high gear, it adds a lot.). If you can stop thinking about what it could have been long enough to appreciate what it is, it's an entertaining film that's certainly far superior to summer duds like Pirates of the Caribbean: Dead Men Tell No Tales or The Mummy. There is still a TV series in development, and maybe that can help more fully realize the potential of the material. Here's hoping there are other films than these.