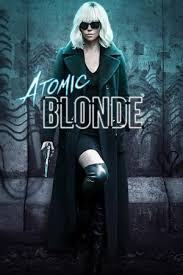 The emphasis on "strong female characters" on film far too often simply means "hot girls who can kick ass." Charlize Theron has had a mixed track record with this: her turn as Imperetor Furiosa in Mad Max: Fury Road transcended the formula to become a true feminist heroine and a performance that deserved an Oscar nomination.  On the other hand, Aeon Flux was the worst kind of "gunderwear" trash, making Tomb Raider look like a masterpiece in comparison, and frankly, Theron was terrible in it. Atomic Blonde is no Fury Road, and it's not a feminist flick.  It's a rough and tough action thriller that isn't afraid to show it's heroine with her face bruised and bloodied, but at it's heart, it is still a gunderwear movie, and a pretty shameless one at that.

Set in 1989. Atomic Blonde  is set against the backdrop of the pending collapse of the Berlin wall and the shifting of alliances in the East and West. An MI6 agent named James Gasciogne is wearing a wristwatch that contains a peice of microfilm with the names of every active field agent in the Soviet Union when he is shot and killed by Yuri Bahktin, a KGB agent.

Enter Lorraine Broughton (Theron), who is sent to Berlin by M16 to retrieve the list and assassinate satchel, a double agent who has been selling intelligence to the Soviets for years, and who gave up Gasciogne. Lorraine meets up with her primary contact, Percival (James MacAvoy) , a cynical but street smart little scrapper who nevertheless doesn't seem to be able to provide her with any substantial leads. She also meets a French agent, Delphine Lasalle (Sofia Boutella), who seems bent on seducing her. Lorraine obliges on the basis  that 1. Delphine might prove useful, and 2. More than half the men in the audience shouted "oh, hell yeah!" when Delphine kissed her.

Theron gives a strong performance, enigmatic and tough as nails. She pulls of the fight scenes with an impressive mix of agility and sheer brute force, very much a female Daniel Craig. She doesn't give us a lot of reason to care about the character until the final third, and even then it's a more a matter of caring about Spyglass (Eddie Marsan), a Stasi officer who memorized the code list, whom Lorraine is trying to protect. The lack of an emotional hook  is not a failing of the acting, it's a deliberate choice of the script and direction. tt's very clear that the feeling was that giving the character any emotional ties or vulnerability with somehow make her appear weak. The result is that the first two acts are a bit of a slog, occasionally broken up by a rousing fight. James MacAvoy gives an effectively smarmy performance as Percival, and the fact that the character is nowhere near as cool as he thinks he is works nicely for Lorraine/Percival dynamic. Boutella, sadly is really not given anything at all to do beyond being hot (and she pulls that off easily. In fact "pull that off' is one of the main bits of direction she seems to have been given.). John Goodman and Toby Jones add tension as the CIA and MI6 agents grilling Lorraine in the film's framing device, but I am frankly starting to get a little worried that Hollywood thinks a slimmed down Goodman has to become a whole new type. Goodman is among my very favorite actors, both for his comic and dramatic abilities, and I am all over the idea that there a lot more to him than "fat guy" roles, but it almost seems that Hollywood thinks he can't be interesting and human without the weight. He is getting relegated to bland supporting roles that are there just to advance the story. Frankly, I would have bought Goodman as action hero or romantic lead back when he was a lot heavier, and the apparent choice to pigeonhole him again is a tragic misuse of one of Hollywood's finest actors.

Director David Leitch makes his solo debut after serving as the uncredited co-director on John Wick, and it's no surprise that he can stage a great action sequence.  The fierce brutality of the fights is such that they don't feel choreographed, and if anything they feel even more real at times than the ones in the Wick films, if not as fun. The most impressive sequence in the film is an all in one shot car chase, though it is clearly influenced by a similar bit in Alfonso Cuaron's Children of Men (and no, it wasn't literally done all in one take with no effects added, but people who think that matters don't get what really makes sequences like that special.). Leitch's effort to make the film feel stylish and oh so cool at all times is less successful, not so much because he doesn't do it, but simply because it gets tedious after a while. Most of the songs on the soundtrack are great, but not all of them fit with the seeming attempt to establish the era, and while the opening credits set to "Cat People ("Putting Out Fire With Gasoline") by David Bowie is nice, Inglorious Basterds  kind of owns that song on film, especially when used in regards to hard edged female character (I may not be one of Tarantino's most vociferous cheerleaders, but I do believe in giving him full credit where it is due, and that was my "ok, I actually think I might love this" moment for that film.).

A little levity would have helped a lot here (it's missing the tongue in cheek sense of humor that makes the John Wick films so watchable.)  Screenwriter Kurt Johnstad (300, Act of Valor, 300: Rise of an Empire) is not exactly known for his clever sense of wit and whimsy, and he could used a co-writer to punch up the dialogue.

Taken as what it is, Atomic Blonde is a serviceable ultra violent action spy thriller with a powerhouse (and very attractive) leas, and if that's all you're paying to see, you'll walk away quite satisfied. But if you wanted something special that broke the mold, I'm afraid that this only chips away at it in a few places but leaves it very much in tact.