Movie Review: "The Glass Castle" Is A Haunting, Poignant Film Bolstered By Powerhouse Performances by Larson and Harrleson 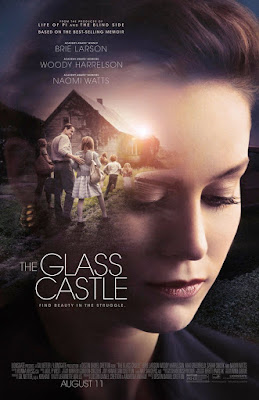 
Some movies hit you hard for different reasons, and sometimes they hit you on a personal level.
The Glass Castle was one of those films for me. Jeannette Walls' best selling 2005 memoir, which chronicles her life growing up in a dirt poor family that moved from place to place to avoid bill collectors and the authorities, portrays an experience that doesn't exactly mirrors my own up bringing, but there's just enough there to give me pause. I grew up poor and home schooled, and experienced both the feelings of isolation that comes with it and the intense bond that develops between siblings who are your only peers, and as someone who has also experienced some significant ups and downs in my relationships with my parents, I couldn't help but feel drawn to the material.


The film begins in 1989, with a grown Jeannette (Brie Larson), a successful gossip columnist for a major New York publication, engaged to an investment banker (Max Greenfield of New Girl.). Jeanette avoids talking about her parents, but when pressed she says that they live on a hill in West Virginia, and that he father is working on developing a new way to convert bituminous coal into energy. In reality, her parents are squatting in a building on the East Side of Manhattan.  The film cuts back and forth between '89 and Jeanette's childhood, where she was the second oldest of four children born to Rex (Woody Harrelson),  and Rose Mary Walls (Naomi Watts). The family moves around Arizona and California  every few months, skipping town whenever Rex and Mary's debts grow too numerous or authorities are looking in too closely at why the children 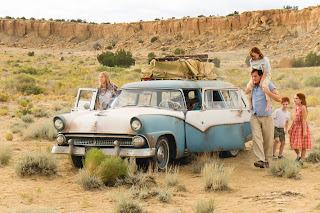 aren't in a "real school" (six-year old Jeanette is badly burned when clothes catch fire as she is cooking hot dogs on an old stove, and this causes child services to look at the children with concern.) Rex, a brilliant man with a vast area of knowledge in a wide range of subjects, tells the kids that you learn by living, and that "this is as real as it gets." Despite their strange lifestyle and poverty, the family is close, and experiences some some genuine happiness together during better times, and Rex and Jeanette, whom he calls "Mountain Goat," share a special bond (the two often talk of one day building a dream house made of glass, and Rex even draws of detailed plans.). But Rex's constant drinking binges mean constantly losing jobs, and too often that leads to even bigger problems, and eventually the children start to realize that they are being forced to take on the responsibility for raising each other, especially after a traumatic incident when visiting Rex's parents, which gives them a sad insight into their father. This leads to the inevitable break up of the family, and eventually to the question of whether there can ever be a reconciliation.

The movie takes some liberties with the "true story", in particular the framing device (and well as the burning incident) but stays very true to the heart of the events and the general experience of life as Jeanette tells it, and despite some Hollywood touches, it honors the unconventional nature of this unique family's story. The film hits you  like an emotional sledgehammer right to the chest, and the portrayal of dysfunctional parenting and the way it leads either to dysfunctional children or children who learn to rise above adversity,  as well as  the balance between anger and love, is filled with a stark sense of reality. 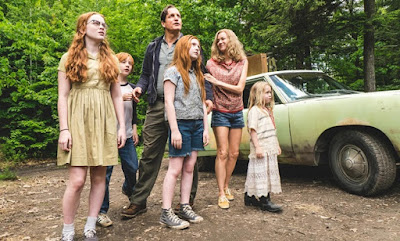 The cast is pure perfection, led by tour de force performances by Harrleson and Larson (if they weren't such stellar and acclaimed actors, these would  be career defining performances, but the fact is that both are capable of moving from one career defining performance to another in the effortless manner of a Meryl Streep or Robert De Niro.). Harrelson's Rex is easy to love and impossible to forgive, and his interplay both with Larson and young Ella Anderson, who plays Jeanette through most of her childhood, is really remarkable, as the actors share a chemistry and connection that feels completely genuine at all times (Anderson deserves far more notice than she is likely to get.). Naomi Watts, one of my favorite actresses, does a terrific job, though her character is perhaps the most enigmatic of the bunch and at times even more maddening than her husband (and yes, I do wish that they had found a part for Jessica Lange in this film so that all of King Kong's living girlfriends could have come together.). Lori, Jeanette's older sister, is very ably portrayed by both Sarah Snook and Sadie Slink (which sounds like a children's book series about junior detectives), and the two actresses look so much alike and embody the same role so well it is almost startling. In general the chemistry between the actors playing the siblings is a triumph, and much of that has to come back to director Destin Dainel Cretton for giving them the time and guidance to develop that connection.

As is almost always the case with stories that span decades, there are the cheesy and unconvincing elements (Harrelson's various wigs and Jeannette morphing dramatically from Anderson to Larson in her teen years), and it wraps up a little too neatly in the end, glossing over or outright ignoring some very significant events. Perhaps the most glossed over elenents are those regarding to Maureen, the youngest sister, though there is a very quick but truly wonderfully subtle dialogue that touches on her feelings of resentment at her being the last one to get out, and the way the youngest becomes less of a priority as the older siblings get caught up in their own lives.