Another year, another London Film & Comic Con.  Held at the Olympia, London and organised by Showmasters, this year saw some big names attending.  We had John Cleese, Christopher LLoyd, Kevin Smith, Wil Weaton and Benedict Cumberbatch to name a few.

I was in attendance the whole weekend and can safely say this has been the most organised comic con I've been to.  I was at the first LFCC when it moved to the Olympia a few years ago and that was, to put it kindly a little chaotic.  The layout was all wrong with not enough room allocated for the guest signings and overcrowding throughout the floors.  Fast forward to 2017 and as promised by Showmasters they have learnt from their mistakes.  The stalls were situated on the ground floor and spread over the entire space of the Olympia.  The walkways were wide and was a breeze to walk down, a task not that easy at most comic cons.

The next floor up was dedicated to the guests.  Here you could get autographs and if you had a photo shoot booked then the booths would be on this floor.  The main stage was also located here too.  A more logical layout.  Around the balcony were the comic book artists who for the first time felt like they were part of the event and not just shoved in a corner somewhere.  The third floor was for the YALC (Young Adult Literature Convention) and had a more relaxed atmosphere to the floors below, how it should be if you want to read a book or talk to the authors. 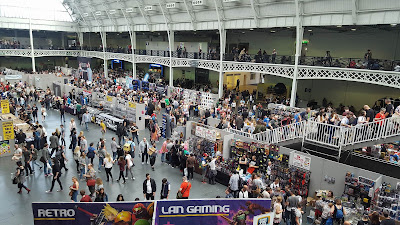 The staff at Showmasters were fantastic and considering they are volunteers and have 12 hour days I didn't meet a single grumpy member of staff.  In fact I want to give a shout out to Thomas and Georgia on the John Rhys-Davies autograph booth.  They went out of their way to get me a brief interview with the Indiana Jones star.  Also the gentleman (sorry I didn't get your name) on the Benedict Cumberbatch photo shoot, which you can imagine was the busiest of the weekend had everything under control and made sure all could hear him when he was giving instructions out.  By far the greatest asset to Showmasters is Phil.  He's a veteran on the comic con circuit and when I headed to my Mark Williams photo shoot he had everything running like clockwork.  When I see Phil on a photo shoot I'm attending I always give a silent "yes" to myself knowing that this is going to go smoothly.  Phil, please don't stop.

The Olympia venue I've warmed to.  At first I wasn't a fan but after attending this year and a revised layout I can honestly say it's perfect for a comic con.  What about LFCC itself?  Well as previously mentioned I think this was the best one yet as far as organisation.  Yes, there were cancellations but that is to be expected when you have so many guests.  Not everything was perfect though.  Of course there's always going to be a few gripes. For me it was the talks and the press.  For some reason, Showmasters have stopped the press from standing at the back of paid talks so we can report on them for our publications.  I can understand if the press take up seats but standing along the side or at the back to take a few photos and scribble down some notes was an essential part of my reviews.  Needless to say that's why I can't tell you anything about the paid talks.  I hadn't booked any and it was too late by the time I had found out.  I hope they change this policy for future shows.

Also the virtual ticketing system for an autograph, well I'm not a big fan and not sure if it actually works.  Some guests were on 1-20 for a good majority of the day and when you have a ticket in the six hundreds, well you don't stand much of a chance.  Dealers getting multiple items signed as well took too much time up, just to make a profit later down the line.  I also suspect that the majority of holders of virtual tickets don't come back so the numbers go up quite quickly.  Not sure what other system can be adopted but a review of the current setup would be appreciated. 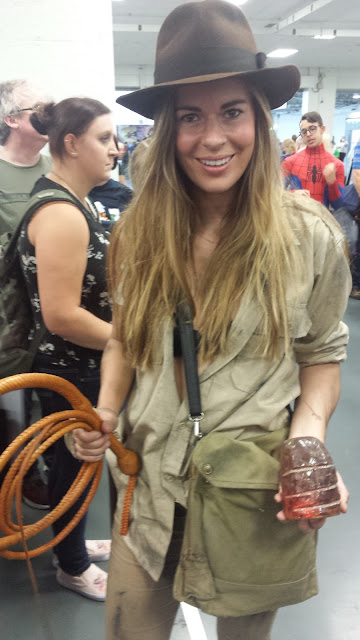 A quick note on prices.  This is not a Showmasters thing but a Comic Con and I suppose a general thing.  Prices for photo shoots and autographs go up every year and we are getting to the point where some are silly money and I wonder how they can justify such a price.  Also the consistency.  Some guests who may have a very small part on a movie or TV series charge over £50 and then you get some guests (Mark Williams) asking just £20 for an autograph.  I hope that prices will level off and maybe even reduce to attract more sales.

Queues are always a part of comic cons.  you won't be able to avoid them but I found this year's comic con the best for physical queues.  I seemed to be in queues less this time around than any other year.  Compared to my first comic cons many moons ago this was a breeze.  Kudos to Showmasters for this one.

A wonderful comic con experience and I think Showmasters can give themselves a pat on the back for this one.  They do improve every year and if they improve on 2017 then next year is going to be a master of shows. 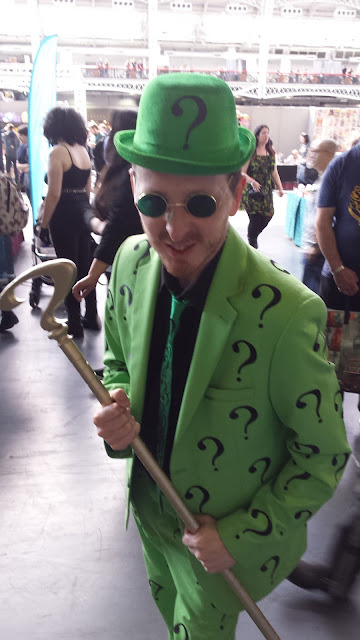 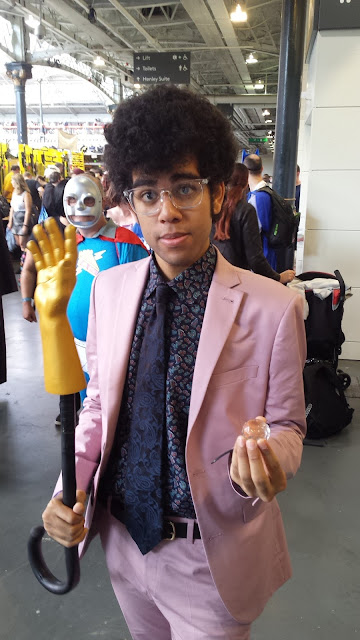 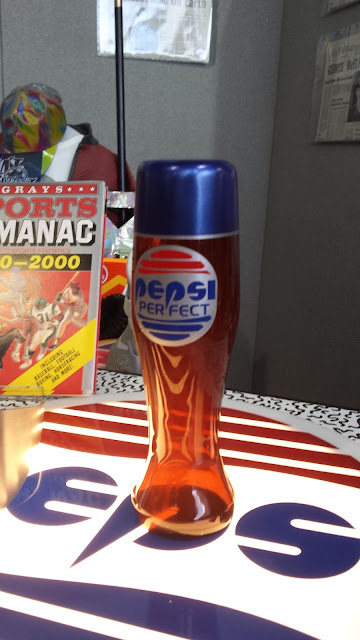 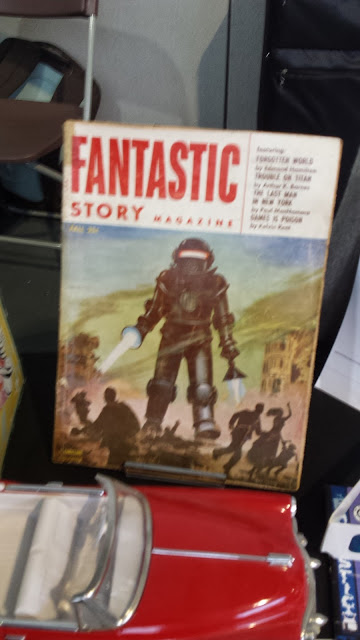 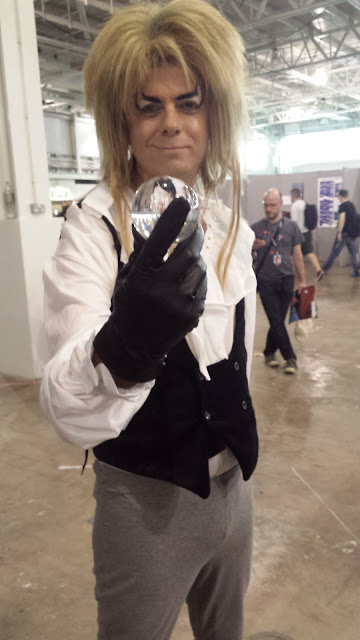 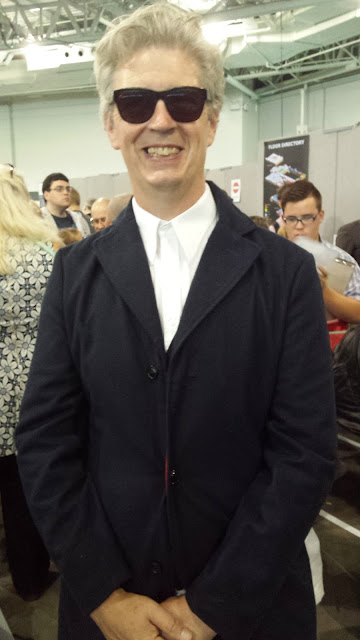 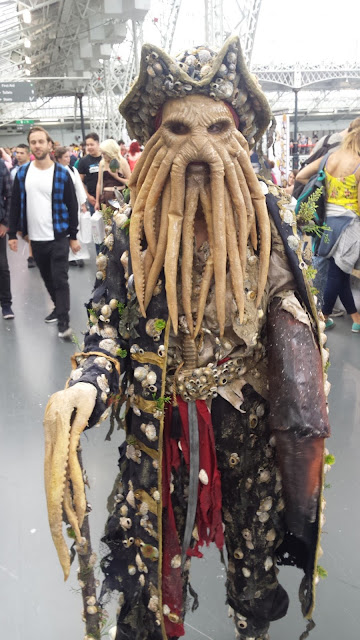 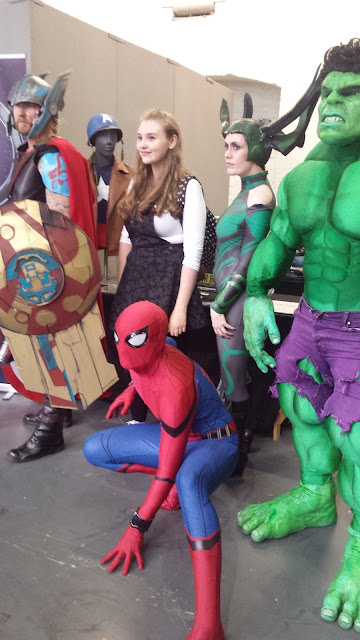 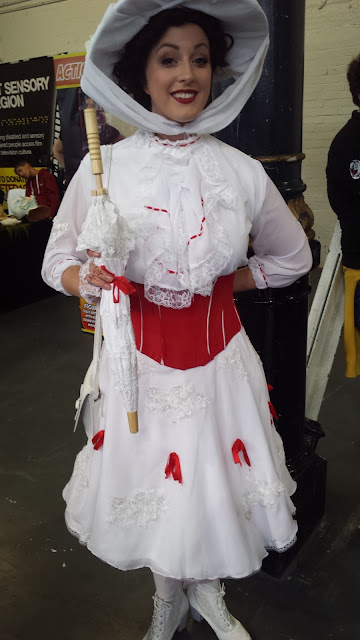 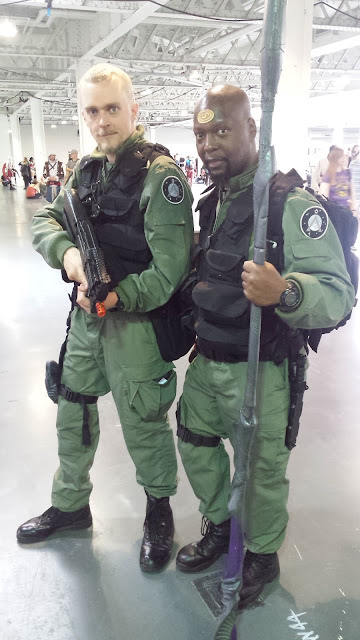 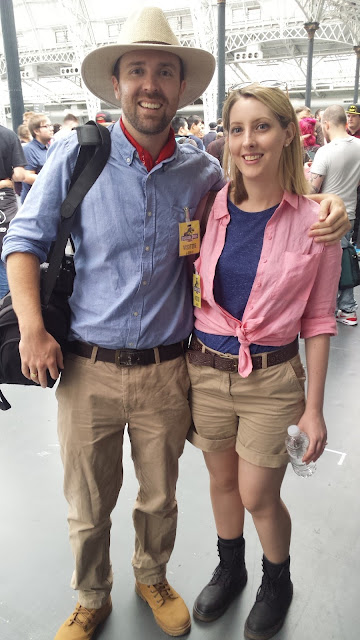 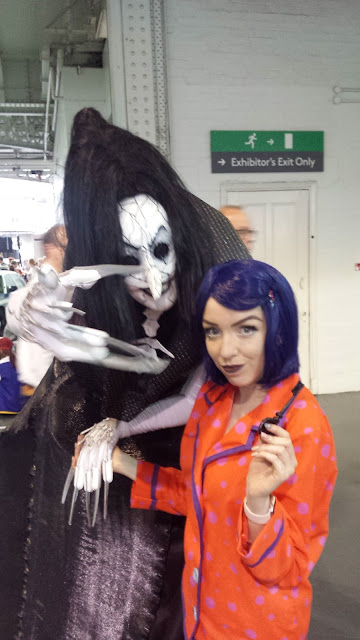 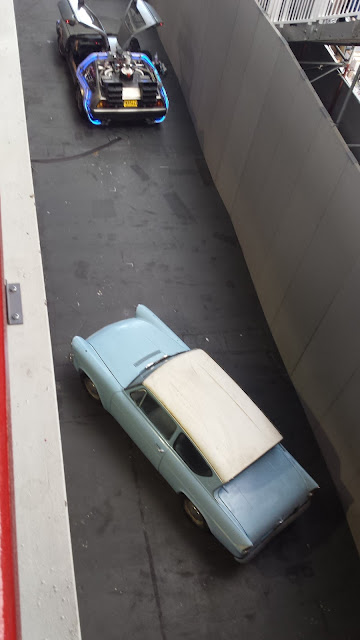 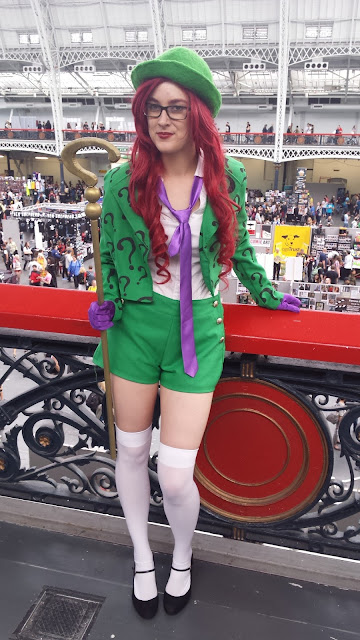 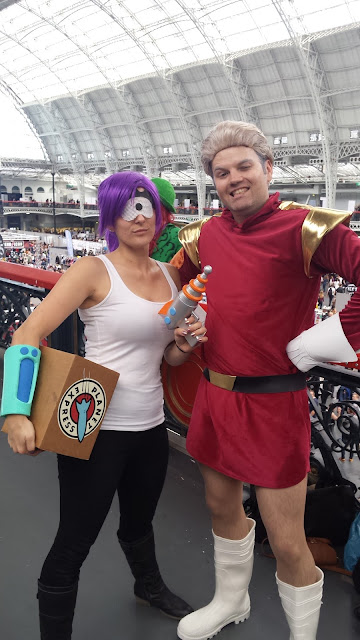 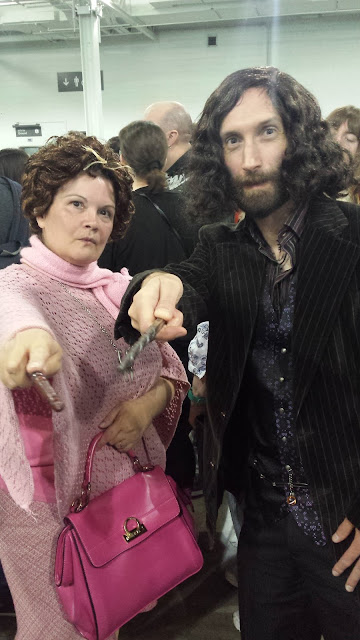 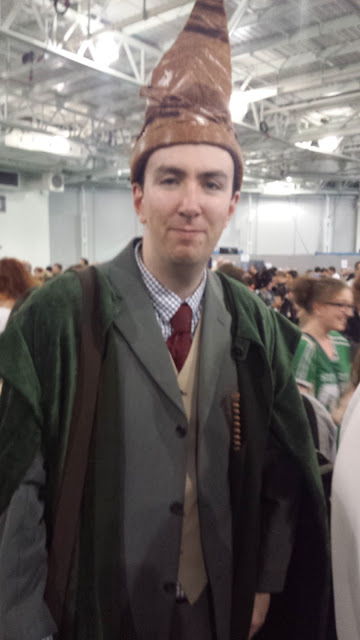 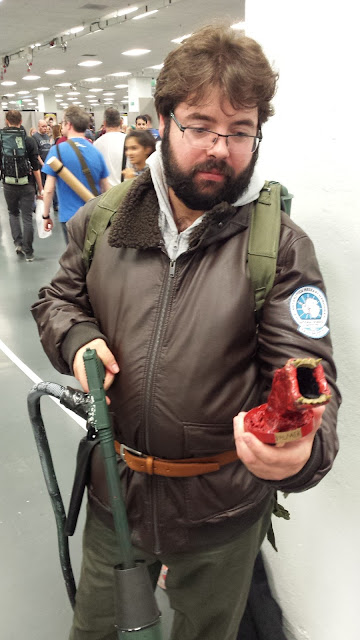 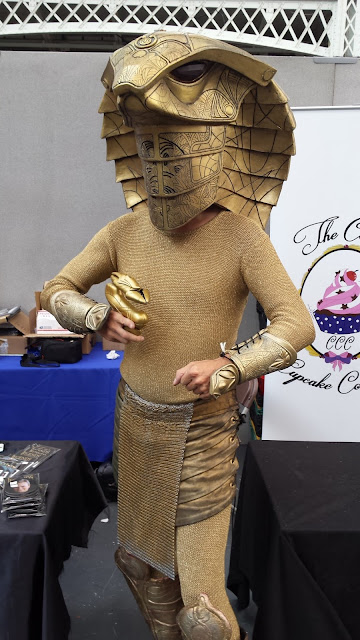 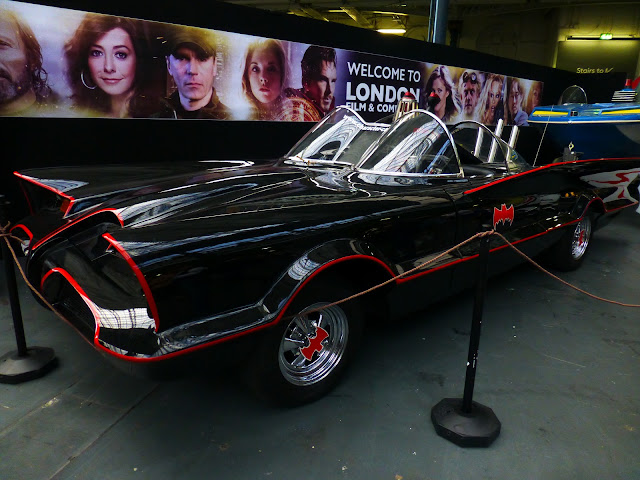 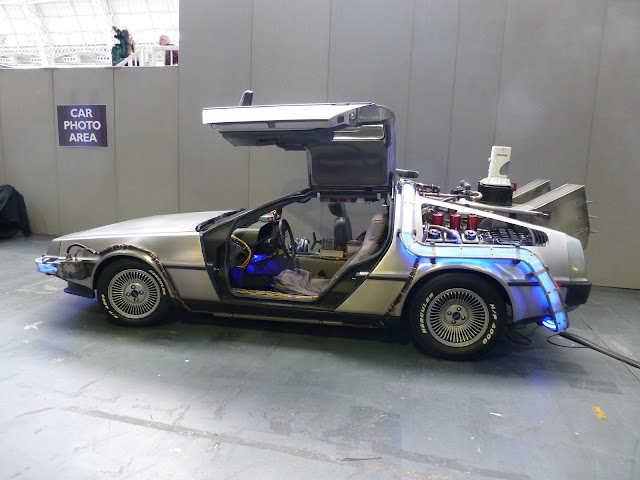 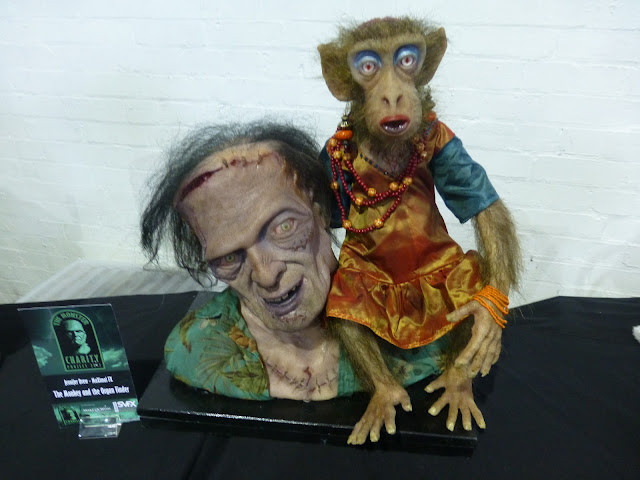