Exclusive: John Rhys-Davies Reveals He Would Love To Be In Indy V But Thinks The Offer Won't Come 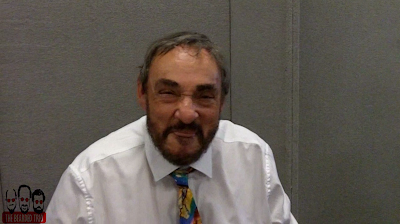 On Friday I was fortunate enough to interview Indiana Jones star, John Rhys-Davies at Showmaster's London Film & Comic Con.  He is such a friendly and down to earth gentleman and was only too happy to answer my questions.  We only had a few minutes but I just had to get in one question on future Indiana Jones and whether he would love to see a return of Sallah in the series.

I have to ask the obvious question as we are a Spielberg website, what was it like working with Mr Spielberg?
I imagine it was like working with a young Mozart.  The man is a genius.  He is one of the greatest filmmakers we've ever had. He tells stories through pictures I think better than anyone has ever done.

With another Indiana Jones movie on the horizon would you consider returning to the franchise?
I would love too.  I suspect, however that the politics of Hollywood have changed and are changing and I don't think the knock on the door will come.  But if it did, and it was more than a wordless cameo, I'd be there.

Last question.  It's an obvious question and I think I know the answer to this one, what is your favourite Steven Spielberg movie?
Oh! There are so many.  How can you...How can you possibly differentiate?  I mean I'm a fan of 1941, I'm a fan of those extraordinary war time films he did.  But I know what you want me to say and in truth...Raiders of the Lost Ark.

Lets hope Hollywood does come knocking on Mr Rhys-Davies' door and offer him that perfect part.  I'm sure you will agree with me that we would love to see Sallah return.

Right at the end I was able to get in my (weak) impression of Sallah and asked Mr Rhys-Davies to rate it out of ten.  Of course being the perfect gentleman he is, he gave me a ten out of ten.  You can catch my impression and the interview on the video below.

Big thanks to Showmasters for giving me the opportunity to interview Mr Rhys-Davies.  The picture he is signing in the video could be yours in a competition coming up this week on The Bearded Trio.