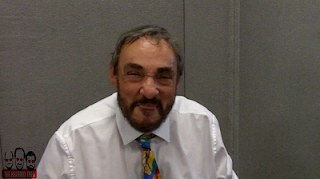 A few weeks ago while we were at London Film & Comic Con we were lucky enough to have a chat with Indiana Jones star, John Rhys-Davies.  You can read our quick interview here.  While we were chatting with the Welsh star he signed a photo for us to use as a prize in a competition and that is exactly what we're doing.

To be in with a chance of winning this signed photo of John Rhys-Davies just answer this simple question:

John Rhys-Davies played Sallah in the Indiana Jones movies.  Which two did he appear in?

Rules
There is one prize draw and the winner is picked at random.  We will contact the winner by social media or email and ask for a posting address.  The competition is open worldwide.  There is no substitute prize and unfortunately we cannot be responsible for loss in post.  The prize draw is open until 4pm GMT 15th August.  The competition is not affiliated in anyway with Lucasfilm or related partners.  We do not pass your details on to anyone else.