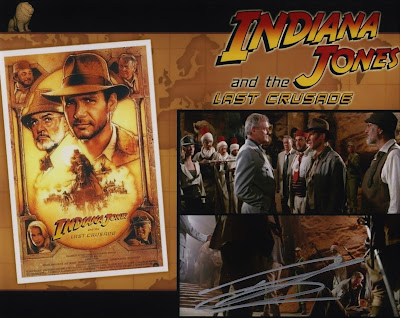 We have another giveaway here on The Bearded Trio and this week you can win a signed Derek Lyons autograph (pictured above.)  Derek has appeared in a huge number of movies over the years including Star Wars, Superman III and Indiana Jones.  He also appears on the recent and incredible documentary, Elstree 1976.

I met Derek in a pub while attending London Film & Comic Con last month and he is so enthusiastic about the movies he's appeared in and is a fan of The Bearded Trio.  He was only too happy to sign a picture to be used as a competition prize.

So, to be in with a chance of winning just answer this question:

Derek Lyons appeared in Indiana Jones and the Last Crusade.  What year was the movie released?

There are three ways to enter.  You can post your answer below, post on our Facebook page or on our Twitter page.  Competition closes on 27th August at 4PM GMT.RulesThere is one prize draw and the winner is picked at random.  We will contact the winner by social media or email and ask for a posting address.  The competition is open worldwide.  There is no substitute prize and unfortunately we cannot be responsible for loss in post.  The prize draw is open until 4pm GMT 27th August.  The competition is not affiliated in anyway with Lucasfilm or related partners.  We do not pass your details on to anyone else.Good luck

For more information on Derek Lyons, check out his website.