Book Review: "War For the Planet Of The Apes: Revelations" Is An Engaging Read 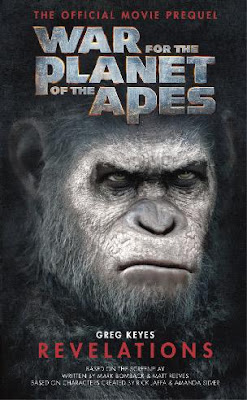 The prequel novel, or "midquel", that takes place between  Dawn of The Planet of the Apes and War For the Planet of the Apes, is strictly for hardcore fans of the series, but this isn't a mark against it. For those of us who can't get enough of this enthralling trilogy, Greg Keyes' novel does a strong job of filling in some of the blanks and delving further into some of the characters that get less screen time in the films.

Beginning immediately after Dawn ends, Revelations follows Caesar and the apes as they are driven from their woodland home, still recovering from the horrifying events in the film, from the betrayal of the bonobo, Koba, who had once been highly trusted by Caesar. It follows Blue Eyes, Caesar's eldest son, who is wrestling with his guilt over the death of his best friend Ash (son of Rocket) at Koba's hands. Blue Eyes cannot forgive himself for being played by Koba, or for freezing up as Ash was being dragged to his death.

The humans that are left in San Francisco are greeted by reinforcements in the form of a warship, the Daedalus, commanded by Colonel John McCollough. When the the ships arrives near the Golden Gate bridge, the apes defend their territory, surprising McCollough with their tenacity, and earning themselves the nickname "Kong" for dropping dangerous objects down on the their enemy from above,  much like in a old video game. While trying to hold off McCullough’s soldiers, Caesar sends Blue Eyes on a mission to the south: he is to lead the humans, Malcolm, Ellie and Alexander, to safety, to try to find a safe haven for the apes, despite rumors of terrible things happening there.
Caesar sends a still grieving Rocket along with Blue Eyes, as well as an orphaned young orangutan named Ray. Meanwhile supporters of Koba’s revolt are spreading dissent among Caesar’s ranks.
Keyes does very well at writing from the apes' point of view, keeping consistent with their still limited knowledge of human ways and the weapons and machinery of the human world. This contrasts sharply from the scenes done from the point of view of McCollough or other humans, and Keyes is good at getting us inside the heads of his characters. He has a strong feel for the already established characters, with the best elements being some very moving interaction between Blue Eyes and Rocket as they both try to come to grips with what happened and what is expected of them in the coming conflict. But even better is Ray, the orangutan, a delightful character whom we never meet in the films, who really provides the heart and soul of this novel. The young orang, who was not long ago a student of Maurice, is light hearted and playful yet deeply ponderous. He describes his dreams regarding the afterlife to the others and is constantly trying to see the bigger picture, and his inner and outer journeys go in unexpected directions. It's also a credit to Keyes' writing that the sections with McCullough and the soldiers are very involving, and you don't feel desperate to turn focus back to the apes.

The biggest drawback here is an inevitable result of where the story is placed, and that is that Caesar himself is given very little character growth and not much to do. The third film is so based around Caesar's arc that the novel kind of forces him to stay in an emotional holding pattern, which is not particularly unrealistic given that he must remain focused on leading his people, but it makes the sections based around him the least interesting in the book, which is problematic, but he really isn't the main character here. To a large extent that role belongs to Blue Eyes, though the narrative is a bit too unfocused to be sure there is a clear protagonist to the story, the upside of this being that characters ranging from Rocket to Cornelia to Winter (the albino gorilla) get some strong development.  The non solider human characters work to mixed effect, and there reaches a point where there are perhaps to many of them. It's also the nature of such a novel that the author is limited in how monumental he can make the events: we're filling in gaps between stories, and there isn't enough room to truly tell a strong story in its own right. The novel succeeds much better as a character piece than as a memorable chapter in the saga.

On the whole, however, this is a tight, intelligent read that added to my experience with the film. If you're a dedicated fan looking for a quick page turner, this is highly enjoyable.