Scientists Prove T-Rex Was A Slow Coach. John Hammond Couldn't Have Clocked It At 32mph. 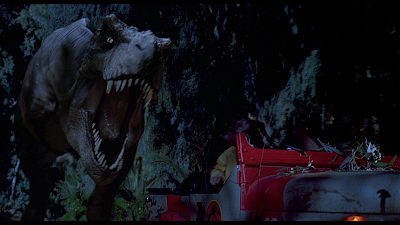 "Well we clocked the T-Rex at 32 mph" said John Hammond enthusiastically to Doctor Grant in Steven Spielberg's 1993 dino-classic Jurassic Park.  We all remember that scene.  You know the one where we get the "Welcome to Jurassic Park" and then the glorious John Williams soundtrack.  Well scientists have gone and messed it all up with their science stuff.  It turns out the T-Rex was a slow coach.  A waddling giant that thought walking is better than running.  Perhaps Doctor Grant's advice "come on guys, it's not a race" was the philosophy originally adopted by the T-Rex.

The BBC tell us:

University of Manchester scientists used a new computer simulation to assess the speed of the massive biped.

Based on T.Rex's muscles alone, the model came up with a maximum speed of 30km/h, but this dropped to 20km/h when skeletal strength was assessed too.
Had it moved from a brisk walk to a sprint, the dinosaur's legs would have snapped under the weight of its body.

"T.Rex is everyone's favourite dinosaur, and palaeontologists have been arguing for years about how fast it could run because this would tell us something about its hunting style and the way it caught its prey,'' said Prof William Sellers.

''This project used a highly realistic computer simulation to predict how T.Rex moved, and it shows that running would have been impossible because its skeleton just isn't strong enough.

''That means that T.Rex was actually quite slow and therefore not a pursuit predator.''

I don't care what science tells me I'm going with the Jurassic World idea.  Lets say they created a better version, a faster version, a more bitey version.  One that would attract more guests.  That's what I'm going with.  That puts the film right in my eyes.  John Hammond's statement remains and that Jeep chase is totally legit.  Explains the lack of feathers too.  So there.

Rob "What about having just one IT guy employed for the whole park?  That needs to be answered." Wainfur
@thebeardedtrio