Read Our Quick Review Of Star Wars: The Forces Of Destiny - Sands of Jakku And Watch The Episode Here 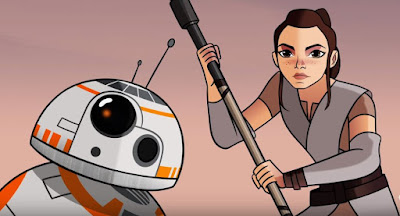 It may only be 2 minutes and 48 seconds long, but the first episode of Star Wars: Forces of Destiny really packs a punch and will make you feel all warm inside.  The episode is titled “Sands of Jakku,”  and centres around fan favourites, Rey and BB-8.  Rey is actually voiced by Daisy Ridley and the episode is introduced by wide-eyed (with her goggles on) Maz Kanata who is voiced by Force Awakens actress, Lupita Nyong'o.

This new series really is a perfect way and size to get a new Star Wars fix wherever you may be.  Perfect for when I grab a coffee break in work.  In this episode listen out for Rey's theme, the wonderful sound effects you expect from a Star Wars movie and watch the clean animation to take you, for a brief moment to a galaxy far far away.  As mentioned the lightning fast episode is over before you know it but has a simple but effective plot that kind of reminded me of the stories I used to come up with when I played with my Star Wars figures.  It made me feel like a kid again and that is no bad thing.  The Force is with Forces of Destiny. 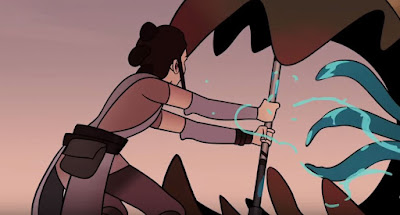 Trivia - The composer for Star Wars: Forces of Destiny, Ryan Shore is a veteran when it comes to providing the music to popular animated TV but did you know that he also provided the music to the excellent documentary on Drew Struzan "Drew: The Man Behind the Poster?"