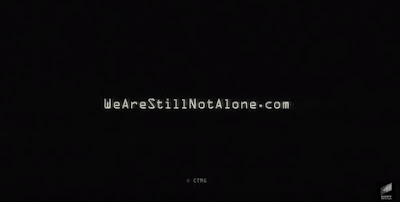 Sony Pictures Entertainment have caused some stir by posting a mysterious movie trailer on their Youtube channel.  Entitled "This Means Something," Close Encounters of the Third Kind fans will recognise this from the 1977 Steven Spielberg UFO classic where Richard Dreyfuss's character becomes obsessed with Devil's Tower.  The trailer features audio from the air traffic control scene along with the radar sequence (one of my favourite scenes.)  Spliced in between the sequence we get glimpses of iconic scenes from Close Encounters of the Third Kind.

Websites across the Internet are speculating that this trailer could mean we are getting a sequel to Close Encounters, 40 years after it's release.  Would we see Roy Neary return to Earth after boarding the mother-ship at the end of the movie?  More evidence of a sequel is the website you can click on in the description for the video.  It's called "We Are Still Not Alone!"  Clicking on the site will take you to a form you can fill in to keep up to date with updates on UFO sightings.

Before you scream at your screen saying "WE DON'T NEED A SEQUEL!" Let me calm all CE3K fans down by saying this campaign is for a 4K Theatrical re-release in time for the 40th anniversary.  News hit the web yesterday that the UK will get the re-release in September but other countries will have to wait and see.  Question is, what version will we get?  Also, if this does well at the cinema then expect movie businessmen to sit up and take note.  Then we may be talking about a sequel.  Keep watching the sk...screens

Watch the trailer below: