Movie Review: "Spider-Man: Homecoming" Is A Funny And Exciting Ride 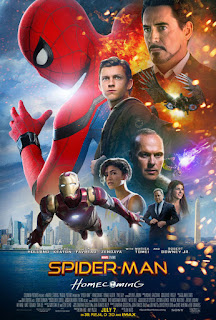 It's been 15 years since the webslinger finally made his way to the big screen, and I remember the night I first saw it vividly. My Spidey sense was tingling with anticipation. These were the days before we had a new superhero flick every few weeks, and Spidey had taken a very long time to make his way to the cinema, so this felt like a huge event. It was an event that totally lived up to the hype, and it really wasn't until this summer with Wonder Woman that I finally saw a comic book film that could match Sam Raimi's  Spider-Man in terms of delivering exactly what I had always wanted to see on the big screen as a kid.

Then came the dark time. Spider-Man 3 really did have some strong moments, but when it was bad, it was jaw scraping across the floor "I love the smell of facepalm in the morning" bad. Then came the reboot, The Amazing Spider-Man, which was a  good pilot episode for a TV series version, minus the subplot about Peter's superspy parents (there is something about Campbell Scott that makes me feel that if he were was cast as Jesus, a large portion of the audience would be saying "I hope the Romans knock that jerk down a few pegs."). And the The Amazing Spider-Man 2 was nothing short of a full blown Batman & Robin scale franchise killer (I am convinced that Jamie Fox thought he was doing an sketch for In Living Color.). All was lost. But then something really weird happened: the Sony hack. As it turned out, a super villain actually saved Spider-Man, because it led to a deal with Marvel Studios. Spidey is now back where he belongs, among friends, and it is truly a homecoming.

As Spider-Man: Homecoming begins, 15-year Old Midtown High Junior Peter Parker is just returning from a trip to Germany for what he is telling everyone is an internship with Stark Industries, which is not entirely untrue, since he is working with Tony Stark (Robert Downey, Jr). But of course he was in Berlin helping Team Iron man fight Team Cap in Civil War. Peter can't wait for his next mission, but Tony wants him to take it easy and just focus on school and being a "friendly neighborhood Spider-Man." Tony assigns Happy Hogan (John Favreau) to keep tabs on the boy, and Peter calls him constantly, barely paying any attention to his school work, or even to his secret crush. Nobody knows Peter's secret, not even his Aunt May (Marisa Tomei) or his best friend, Ned (Jacob Battalon.), But Peter is determined to make this work, to become an Avenger, to make the world a better place, and to get out of High School early because he is "so far beyond that now."

Meanwhile, a contractor named Adrian Toomes (Michael Keaton) and his crew, who were pushed out of a salvage contract on the Stark building after the famous "New York Incident"(the government and Stark industries stepped in), has gone into a new line of work after walking away with some alien technology found on the scene.  It goes without saying that his new business isn't on the up and up. and it's not long before he and his alter ego, "The Vulture" cross paths with Spider-Man.

The approach here is the polar opposite of The Amazing Spider-Man series. Instead of an angsty, emo take on Spidey, we have a light-hearted comic version that recalls the John Hughes era so much so that there is an overt Ferris Beuhler reference. It's a very funny film, with a number of laugh out loud moments, and it's really the only way they could have gone with the material at this point in time. We've can't sit through  Uncle Ben dying a third time, or Peter wrestling yet again with the question of whether to risk having a girlfriend dragged into his dangerous lifestyle. That being said, this does lead to an inevitable consequence: this movie is missing the emotional gravitas of the original, and I never found myself as invested or as thrilled as I was by Sam Raimi's first two films (admittedly, a factors such as how many films there have been, me being 15 years older and a new superhero films not exactly feeling like a novelty contribute to this fact.). Still, the new take is an awful lot of fun, knowing exactly what it is going for and never stumbling. Let's be honest: watching Spidey get fully integrated into the MCU, interacting with Robert Downey, Jr,, Michael Keaton and Jon Favreau  is about as much entertainment  as a Marvel geek can handle.

Tom Holland is a terrific actor, and I've been a big fan ever since The Impossible, when his startlingly mature performance completely overshadowed Ewan MacGregor and Naomi Watts (two of my favorite actors.). Holland makes a great Peter (but you already know that), and he can carry a movie easily with his charm and presence. It is wonderfully refreshing to see a High School movie where the cast actually looks like they could be in High School (on this level, it's much better than a John Hughes film). Keaton is splendid as the villain, clearly channeling a bit of Jack Nicholson just for the fun of it, but also giving the character a very human side. Marisa Tomei, an actress I've had mixed feelings about in the past, makes a really lovable Aunt May (Sally Field was easily the best part of the previous two films, but Tomei's take on the character is new and creative, and the "hot aunt" angle is underplayed but creates so many fun possibilities.). Jacob Battalon's Ned is endearing, and whenever he and Holland are on screen together, they feel so natural that you just can't help but love them (it's also really nice that they avoid going the easy route and playing Ned as a token '"fat kid".). For me, the biggest surprise was how amusing I found Tony Revolori's performance as Flash Thompson. I was utterly confused by the casting of the Grand Budapest Hotel star in this role, but this is a completely different Flash than we've seen before and he really makes the character his own.

Comic book purists who can't handle any changes may struggle with this movie, because it plays so fast and loose with some of the established elements. But you have to look at this as the MCU version of the character. The is very clearly not the definitive version of the character or his story, and that is just fine. This is its own thing, just as it should be. Director Jon Watts is a comfortable hand behind the camera, and cinematographer Salvatore Totino is a master, and if you can deal with different comic book writers varying the story in different timelines, why throw a fit every time a movie does it's own little tweaks?

Some plots elements are a bit far fetched even for the genre, however. While I love that Tony Stark made the Spidey suit, given that I always had a problem with how easily Tobey MaGuire's Peter Parker made his own suit with so little to work with, this particular suit has so many spectacular features that the idea that it was created in a couple of days goes beyond suspension of disbelief for me, and honestly, this is Spider-Man, not Iron Man. Spidey has powers, he doesn't need that much tech, and it actually detracts a bit from,hat makes him special. At times it almost feels like this is Iron Man, Jr rather than Spider-Man.

All in all, Spider-Man: Homecoming continues the hot streak from Marvel Studios (a very good thing, since DC is finally starting to become worthy competition) and is about as much fun as anything you'll see in a darkened theater this summer.

(And for those few who haven't gotten the cue yet, or who have gotten bored with it, I have to give a reminder to STAY UNTIL THE CREDITS ARE OVER. This is bar none my favorite post credits stinger in the history of Marvel.).