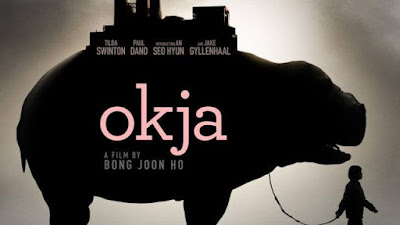 Despite the backlash against Netflix for bypassing the theater experience and the fear of Hollywood power players that movies are becoming something you watch on a phone instead of big screen (a fear I do share), I give the company credit for providing an outlet for indie film that is getting a chance to be seen. The magic of a darkened movie house is sacred to me, but as an indie filmmaker myself, to paraphrase the song: it don't mean a thing if the film don't get seen. If wider audience are given a chance to see Beasts of Not Nation or The Little Prince, I frankly don't care how they view them.

The latest big indie to hit the the streaming behemoth is Okja, Korean filmmaker Bong Joon Ho's follow up to the acclaimed 2013 distopian science fiction thriller Snowpiercer. Like that film, Okja is ambitious, if less focused and sure of itself.

As the film opens, it is 2007, and Lucy Mirando (Tilda Swinton) is taking over for her controversial father and her cruel (and criminally implicated)  twin sister Nancy as the new CEO of the Mirando Corporation. Lucy holds a press conference to announce that Mirando has been breeding "superpigs", a new scientific discovery that promises to revolutionize the livestock industry. Twenty-six of the pigs will be sent to locations around the world, and in ten years time, one will be crowned "Best Super Pig."

We jump cut to ten years later, and a young girl named Mija (Ahn Seo-hyun) leads a quiet existence in the South Korean countryside with her farmer grandfather, and Okja, the super pig they have raised and cared for over the past decade.  Their isolation is broken when they are visited by Mirando spokesman and celebrity zoologist Dr. Johnny Wilcox (Jake Gyllenhaal), who announces that Okja is has been chosen as best super pig, and is on her way to New York City.

Determined to bring her best friend back home, Mija runs away to Seoul to find Okja, where she sees the pig being loaded onto a truck. Mila chases down the truck like a plucky little action heroine, but they are soon intercepted by another vehicle full of activists from the ALF (Animal Liberation Front, who have their own plans to use Okja to expose the evils being committed by the Mirando Corporation. Before long, Mija and her friend are caught between Mirando, the ALF and Dr. Johnny, all of whom have their own agendas.

The film is wildly uneven, constantly shifting tones from sweet to satirical to intense, and it's a tricky mixture. At times it actually works pretty well, and this quirky film becomes quite engrossing. But the elements that don't work fail spectacularly and are frankly obnoxious. Chief among these is Dr. Johnny, the whiny and wild eyed TV star who plays like a cross between Steve Irwin, Ned Flanders and Ruby Rod from The Fifth Element. I've been an admirer of Gyllenhaal as an actor ever since October Sky, but there is no getting around the fact that this is a terrible performance. In fact, it's the worst performance from a major star since Eddie Redmayne in Jupiter Ascending. The shrieky voice and theatrical mannerisms are so far beyond over the top that it's hard to believe at times that no one tried to step in and say "this just isn't working." But producer Tilda Swinton was likely too distracted by not one but two self indulgent performances of her own (she also appears as Nancy, the even more evil twin.). Swinton has an ability to make "over the top" actually work, and her characterizations are more successful than Gyllenhaal's, but the long sections when we flash back to her character are a bit of an ordeal to get through. We get it, corporate America is corrupt and in the end it's going to get us all. I don't disagree with this point in the least, but I'd rather watch it portrayed with some subtlety instead of shrill and rarely amusing attempted satire that too often consists of watching people smoke and casually drop F-bomb to indicate how phony and callous they are.

The ALF characters work a bit better, and the most successful satire involves them (when we first meet the group, one of the members is on the verge of passing out because he is boycotting food, as "all food production is exploitative."). These characters are broad and are also used for social commentary, but they are not without heart, especially their leader (Paul Dano), who genuinely grows to care for Mija. But the fact remains that Okja, grandfather and Mija are the only characters who feel three dimensional enough to be interesting, and whenever too much time is spent on anyone else, the film loses its way.

The film deserves credit for trying to be unconventional and for trying to make a point, and the exploration of the willful denial of the more horrific aspects of the meat industry and stark and disturbing, especially when we see a farm/slaughterhouse that feels a little too much like an Auschwitz for pigs for comfort. The the guilt and uncertainty it raises among viewers will probably stick with them until their next meal, at which point they will shrug it off and think about something else (and I can't help but feel that if the movie wanted some truly biting satire, they might have tried harder to play with that fact.).

The film is by far at its best when focusing on Mija and Okja, and the effects are remarkable. As much as I may have wanted this to be more of a sweet adventure about a girl and her pig, I can't blame the director for for more and trying to make some important points. But the fact remains that the films bites off far more than it can chew, and its chokes on itself. It's a worthy effort that comes close to convincing you it is working, but never truly comes together.