Movie Review: Insipid and and Insulting "Wish Upon" Will Make You Wish You'd Stayed At Home 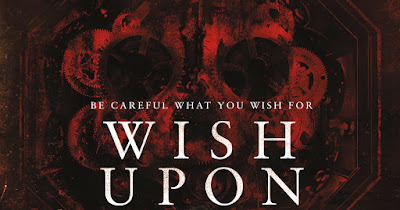 Some bad films are made with such passion, such enthusiasm for the material and such a delusional sense of artistry and quality that they are enjoyable in spite of themselves, because there is just something so absurdly funny about the fact that someone put their heart and soul into this junk.

Wish Upon is NOT one of those films.

The movie begins with a grotesque (if cheesy) sequence of a mother hanging herself in front of her 4-year old daughter, and becomes less pleasant and entertaining from there.

Our teen heroine, Clare Shannon (Joey King) has been plagued by this recurring nightmare since childhood, reliving in her dreams what is decidedly the most traumatizing moment of her life (and this is a girl who has been in multiple Roland Emmerich films.). She now lives at home with her Dad (Ryan Phillipe), who spends most of his time dumpster diving with his token black friend, friend Carl (ever notice how white people have names like Lenny, whereas black people have names like Carl?).

At school, Clare has her two besties, Meredith (Sydney Park) and June (Stranger's Things' Shannon Purser, a.k.a Barb.) The three like, talk and take selfies and totally do other besty type things, which is why they are like, total besties. But unfortunately, the school bitch, Gina (Alice Lee) has it in for them, and she like, totally destroys the mural Claire made to advertise the big dance by throwing a drink at it (the mural, not the dance.). Later that same day, Claire and Gina get into a girl fight in the cafeteria, but it's, like, not even hot (teenagers are shallow and stupid. Remember that.). 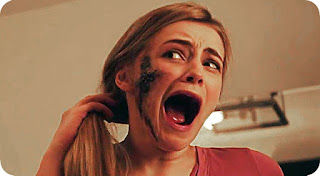 When Claire gets home, her Dad gives her a present: a thing he and Carl found in the garbage! Specifically, it's a box with Chinese writing on it, and since Clare is studying Mandarin in school (and also likes things), Dad naturally thought of her. Studying the writing on the box, Clare discovers that it can supposedly grant seven wishes. Not taking the promise seriously, she wishes that " Gina would just like, just go rot." The next morning, Gina wakes up to find that her skin is literally rotting away in several places, and when Clare gets to school she learns that Gina has necrotizing fascitiitis, and she is going to lose some toes, part of the flesh on her leg and even some of her face. Claire and her besties (especially Meredith) react to this news with unbridled glee. That's right: a girl is losing several toes and part of her face, but since she's like, a total bitch, the characters we are supposed to be rooting for are celebrating, because that's what teenagers do, of course. (Teenagers are shallow and stupid. Remember that.).

What's more, bad things start happening (because a girl's face rotting off soooo doesn't count) it seems that every time a wish is granted, someone in Clare's life dies. Not that Clare notices this right away. She makes five wishes before she starts to notice a connection. FIVE DAMN WISHES. If you had a magic box that granted you wishes, by the second time somebody dropped dead the same day the MAGIC BOX GRANTED YOUR WISH, you'd be pretty sure there was a connection. But not Clare. Because Clare is becoming an addict, denying that she has a magic box problem until it is too late to get help (Teenagers are shallow and stupid. Remember that.). 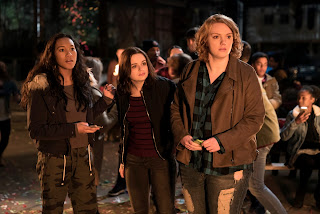 It's one thing when a movie is stupid because the filmmakers ares stupid. But one gets the feeling viewing Wish Upon that in this case it's a matter of them thinking their audience is stupid. There's a palpable feeling of disdain for the very teenage filmgoers upon which the film is relying for its box office. Barbara Marshall's screenplay made Hollywood's celebrated Blacklist (a list of the best unsold screenplays for the year), which means either the script was butchered somewhere along the line or some producer/executive was playing a very sick practical joke. And the insipid writing isn't helped by director John R. Leonetti's odd choices in shot selection, his tendency to have characters stand and stare just barely off-camera, or the "we're keeping this PG-13" pattern of setting up elaborate, labored grisly accidents only to cut away when they actually happen, annoying the crowd that wants to see gore and boring the crowd that doesn't laugh at the silliness of how the characters keep getting themselves into these "And now I am going to pull my legs out of the quicksand with my face" situations.

The cast is mostly capable, but can't do anything with the material: King overacts her most emotional scenes and Phillipe sleepwalks (is this really all he can get these days?). Purser and especially Park do their best to make something out of the horribly written roles, and its a testament to Park's charisma that she manages to make a somewhat positive impression while playing the most obnoxious character in the film.
watching

Any small amount of credit the movie earns for having an Asian-American romantic interest (Ki Hong Lee of Unbreakable Kimmy Schmidtt) is completely undone by the  moment when he reasons that he can bribe his cousin into translating ancient Chinese because "she's a slut for won tons." What's more, the under appreciated Asian friend with a crush is becoming a stock character type in High School movies. In fact, all of the characters are cookie cutter teen movie characters and the situations cookie cutter teen/horror contrivances, and much like when a beginner uses a cookie cutter for the first time, a lot of dough is wasted here.

That's not to say that the film has a slick, big budget look. For a studio release, this looks and plays remarkably like a student film, and the cinematography looks like digital video in the same way that something you shot on your phone does, not like a master craftsman making a movie with cutting edge technology.

It's very hard to believe that anyone out there is going to find this movie enjoyable, as it fails to provide scares, thrills, drama, or any intentional laughs. And if teens do enjoy it, that should not be seen as a defense of the film, but as an indictment of the meager quality of entertainment choices aimed at that audience. The Hunger Games was a phenomenon because it was so far above most of what is aimed at that age range, and frankly, even Twilight was slightly above average. If we care about our teen audiences (and our teen actors), we need to start respecting them. We need more Edge of Seventeens, Stranger Things and Spider-Man: Homecomings that portray kids as people (and intelligent ones at that) in compelling situations. Teenagers are only shallow and stupid if we teach them that they are. Remember that.