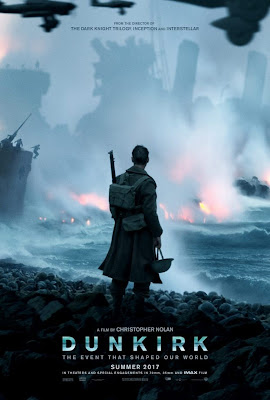 Despite his repeated critical commercial success, filmmaker Christopher Nolan has yet to receive an Academy Award nomination for directing. But that is all but certain to change now with his latest film, the spectacular and innovative World War II epic Dunkirk. Brilliantly directed, gorgeously photographed and superbly edited, Dunkirk is a film that demands to be seen on a giant IMAX screen, and one which definitively demonstrates that television can never entirely replace the theatrical experience, no matter how good the shows or the home theater technology get,. The small screen simply doesn't have the same immersive power, or the feeling of a shared experience.

At once distinctly Nolan-esque and unlike anything he's done before, Dunkirk tells the story of one of the greatest moments of the second World War, when over 22,000 British soldiers were evacuated after being driven to the sea. The film follows three perspectives of the event, all taking places at different times until they eventually converge, cutting back and forth between them (a bit like the Return of the Jedi final battle formula, but spanning an entire film.).

The three are as follows:

1. The Mole
(this story begins one week before the evacuation)
The title for this story refers to the long jetty (made of stone and wood) at the mouth of the port to the sea, and the primary focus of this perspective is Tommy (Fionn Whitehead), a British Army Private on the beach, who is trying to avoid the dive bombers. It also covers Commander Bolton (Kenneth Branagh), the ranking Officer, who is desperately trying to get as many men evacuated as possible, as well as to keep his fellow officers calm, despite little support from high command.

2. The Air
(one hour before the evacuation)

This story follows Tom Hardy and Jack Lowden as Farrier and Collins, RAF Spitfire pilots who are trying to provide air support for the rescue ships that are supposed to arrive, dog fighting with German aircraft and keeping the bombers at bay so the ground troops can be safely evacuated from the beach. It features some of the most nail biting aerial combat sequences we've ever seen, not only because they a big and bold but because they are starkly real, and free of  any Top Gun style flourish or Pearl Harbor's embarrassing amusement park ride approach to warfare.

3. The Sea
(one day before the evacuation)
The third (and best) story follows Dawson (Mark Rylance), a British yacht owner and patriot who sets to sea with his son Peter (Tom Glynn-Carney) and Peter's friend George (Barry Keoghan) to answer the call for civilians vessels to help evacuate the stranded troops. More than anything else, this a side of war we haven't really seen before, and certainly not in a major Hollywood epic.

There's no question that Dunkirk is a director's film, from the first frame to the last. Nolan and cinematographer Hoyte Van Hoytema  (Interstellar, Spectre, Tinker, Tailor, Soldier, Spy) know how to paint a picture, and film editor Lee Smith is wickedly adept at making chaos flow seemlessly . The intricacy of the staging and attention to detail is literally overwhelming, and the only war film that compare in terms of sheer size and scope in recent memory is Stalingrad. But where Dunkirk triumphs over that film is that, regardless of what country produced it, Stalingrad was chock full of Hollywood bombast and suffered from soap opera plotting,. While Dunkirk has characters and stories, it is primarily a chronicle of an event and a reflection of that experience. It doesn't waste time with artificial drama when there is so much real drama taking place (and at 1 hour 45 minutes, it's Nolan's shortest film since Following. ). Nolan also makes the somewhat risky choice (at least from an Oscar bait standpoint) of leaving out the brutal, in your face blood and guts that has come to define the modern war epic since Saving Private Ryan. This could have been a major misstep had it detracted from the intensity, but truth be told, the competition to see who can give us the most unflinching grotesque moment in a war film is starting to feel forced, and Ingloriuous Basterds, skillfull as it was, may have robbed bloody war violence of its sense of being a necessary touch realism by mixing it so heavily with a gleeful sadism. While Hacksaw Ridge managed to make it work because the story itself was about violence, that film (like any Mel Gibson movie) had an element of having its cake and killing it, too. Dunkirk manages to be perfectly effective without all of that, instilling us with a palpable sense of fear and imminent death coming from all sides without ever seeing a single head explode.

Being a director's film defined so much by visuals aesthetics, it's easy to dismiss the actors, but the uniformly strong cast adds immeasurably to the proceedings. Mark Rylance is quietly effective and compelling that it's impossible to picture anyone else in the role, and Cillian Murphy (in a role that's sadly likely to be passed over for Oscar or other award nominations) is equally good in a portrayal that shows the horrors of traumatic stress and rash action in a non-judgemental way.  Kenneth Branagh has a small role but brings considerable presence and emotional weight to it  (and gets almost as much emotion from a single word line as Princess Leia did in Rogue One). Tom Hardy is once again stuck with a mask that muffles everything he says and limited to only sporadic bursts of dialogue, but he takes on the task of representing not so much a specific character but all of the pilots who risked so many dangers in one of the most glamorized but frightening jobs in the war. Fionn Whitehead makes an effective everyman, even if the character is deliberately ill defined.

The unique story structure of the film is quite possibly the most innovative seen in studio feature since Pulp Fiction, and may be a little difficult for some viewers to fully follow, but it's so enthralling that even those who don't will be swept up in the drama of the film and sitting on the edge of their seat for its entire runtime. Like Ron Howard's Apollo 13, this is a rescue and survival drama which loses nothing from the fact that we know how it turns out. Nolan has created several sequences here which rank among the most memorable of his illustrious career, included a nail-biter with a downed pilot trying to escape from his plane before it sinks, crosscutting with a group of soldiers huddled in an abandoned beached ship while it rapidly fills with water, to the moment of the evacuation itself. Even writing about them gets us excited enough that we can't wait to see the film again. (And

The only noteworthy drawback to the film is that once again, while fighting to prove that film and theaters are where it's at, Nolan does make one major argument in favor of home video, namely the ability to turn on subtitles and clarify what someone just said. Nolan and his composer, Hans Zimmer, are all about that bass, and when you combine that with shells exploding, the earth shaking and a fair amount of mumbling, and far too much of the dialogue is lost. That's not as problematic here as it was in Interstellar because the story is so straightforward, and it's much less puzzling choice in his setting. Still, it is sometimes frustrating.

Dunkirk is an extraordinary achievement, and its one of the few genuine "must see" films of the summer. It's tightly paced, heart-pounding and enthralling, and at times incredibly moving.  It ranks among the great war films of all time and demonstrates again that Christopher Nolan is among the most gifted filmmakers of his generation, and working in Hollywood today. And once again, we cannot overstate the importance of seeing it on an IMAX screen. This is a film that reminds us of what "big screen" means, and it needs to be seen on one to get the full experience.