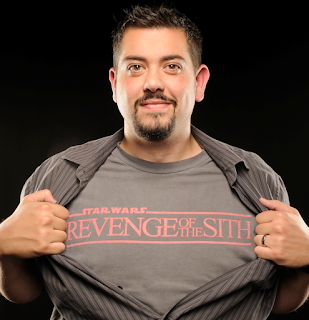 The influence of story is a powerful one. It can inspire others to create, guide us towards other art forms, teach us lessons and give us something to relate to. It can bring people of different beliefs/religions together in a common bond. Storytellers are a revered part of our culture. They are the ones who remind us of who we are, and that we are not all that different regardless of our past.

One such storyteller is called Bryan Young. Bryan is a well-known member of the vast and ever growing Star Wars fandom. Bryan hosts a Star Wars podcast called Full of Sith along with fellow co-hosts Tha Mike Pilot and Holly Frey, and another podcast called Fauxthentic History, which takes fictional events and treats them as though they are real-life historical accounts (Bryan also co-hosts this show with Holly). Bryan has written novellas, countless short stories, worked in film, and is an avid reader.

For Bryan, his interest in storytelling and writing came at an early age. “I’ve found short stories I wrote in kindergarten, including a tale about an owl clawing a person’s eye out.” Once his 5th grade teacher discovered his talent, Bryan was encouraged to compete in the Academic Olympics in both History and Creative Writing. Bryan’s fascination with storytelling only snowballed from that point on.

Just like any artist, pigeon-holing oneself to one art form is a potentially quick path to a creative graveyard. Artists are constantly on the hunt for inspiration and other ways to express themselves. Naturally, Bryan was no exception. A few years after writing his own version of Alfred Hitchcock’s The Birds, Bryan became equally enthralled in film. “I remember vividly being about eight years old and Who Framed Roger Rabbit? was coming out.” From that point on, Bryan was fascinated with how films were made. The incorporation of animation in film is a technique that dates back to the early days of film, The Enchanted Drawing (1900) being the first example of this.

As an avid Star Wars fan and a writer/storyteller, Bryan was greatly influenced by the creator of Star Wars, George Lucas. “He taught me a lot. But he also introduced me, inadvertently, to other filmmakers and storytellers I needed to know about.” Bryan goes on to say that by way of Lucas, he was introduced to the films of famed Japanese director, Akira Kurosawa.

Bryan became deeply involved with the filming of two documentaries, This Divided State (2005), of which he was the assistant director, and Killer at Large (2008), where his increasing experience and talent gave him the opportunity to wear multiple hats of producer, co-cinematographer, co-editor, and an assistant director. Talking about how he got involved with This Divided State, Bryan says, “I was working on a feature film when it was announced that Michael Moore was coming to a small college campus in the middle of the most conservative city in the country (Salt Lake City).” The camera started rolling and the sparks started to fly. 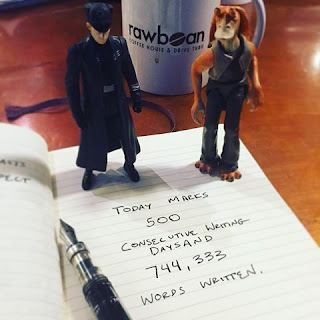 Every artist needs a spark to keep the imagination flowing, whether it’s an outside influence or something that comes from within. When it comes to Bryan, he writes what he wants to see, and works on it every day without exception. Read, research, and write, seems to be his mantra, as it all fuels his work.

For those interested in reading books on writing Bryan highly recommends Robert Mckee’s Story, although he does admit it’s more about screenwriting, “but it helps you understand the fundamental building blocks of what story is.” He is also a big fan of Graham Greene’s The End of the Affair, Patrick Rothfuss’s Kingkiller Chronicles, Don Quixote, and everything by Kurt Vonnegut.
The many different fields of writing have obviously been beneficial to Bryan’s writing career. It has made him flexible and able to adapt to any freelance situation that might arise. Bryan maintains that, “the way stories are structured is largely the same; it’s the medium that changes.” He encourages that learning different media has helped him understand each one better and that he is able play to the strengths of each.

Right now Bryan is working on finding an agent for his current book, in order to take a more traditional route of publishing his book (Bryan is particularly proud of his novel Aeronaut which can be found on Amazon or his website bryanyoungfiction.com). He is also in post-production on a short film he wrote, produced and directed—upon completion he intends to submit to film festivals. Bryan also has a monthly patreon, where those who would like to follow his work can donate a small amount of money each month in return for a short story, where the topic is determined by the subscriber.

Bryan has future plans to do more work in the field of animation filmmaking. “Had I a team and the resources to do something in animation, I would jump at the chance.”

In case anyone would like to follow Bryan and his exploits in storytelling in its many different incantations he can be found on twitter @swankmotron, his aforementioned writing blog, bryanyoungfiction.com, his also aforementioned podcasts Full of Sith and Fauxthentic History, Bryan also writes for bigshinyrobot.com, starwars.com, and howstuffworks.com.

For the complete interview click on this clink below:
https://docs.google.com/document/d/1vK0SEk6ZtTTfOpRUGCoAEiYGpQxnqOS5dWCKfTqGMZc/edit