Hybride is extremely proud to have contributed its VFX expertise to Luc Besson’s epic fiction action-adventure, Valerian and the City of a Thousand Planets.
Joining forces once again with the team at Industrial Light & Magic (ILM), the studio delivered 300 shots—for a total of 17 minutes of screen time—for one of the biggest cinematic events of the summer.

Working closely with ILM visual effects supervisor Philippe Rebours, Hybride artists skillfully crafted VFX for the opening Big Market sequence on the desert world of Kirian. Based on the look development created by ILM’s art department, Hybride artists produced assets that include highly detailed slanted rock formations and mushroom shaped rocks for Kirian’s colorful and unique geology that can be seen outside of the arena market, as well as at the main gate and tower.

Hybride also produced massive desert set extensions and populated the desert arena with nearly 12,500 digi doubles based on a range of 250 leading characters using Horde — an innovative in-house proprietary crowd system. To stay true to the film’s highly colorful look, the studio recreated a specific wardrobe for the characters based on images received of the extras that had been filmed on set.


On Kirian, Valerian uses a virtual reality technology to travel to an enormous virtual market set in a double world. “The Big Market is actually located in a desert arena, with a million shops on five different levels”, said Hybride visual effects supervisor Joseph Kasparian. “When you’re in the first world, all you see is the desert. The shops appear when you put on your helmet and sensors on.” The final Kirian desert sequence shots were split between ILM and Hybride: the shots seen from the desert side were produced by Hydride, whereas the scenes inside the market were all created by ILM.

Since the clouds were a key aspect of the sequence’s look, Hybride used a sky 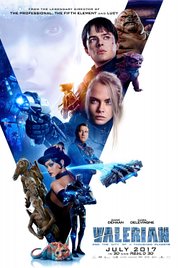 set up system filled with multicolored clouds provided by ILM to customize the look of each shot. “The library contained a variety of clouds with frontlighting and backlighting, so we could change the colors and orientation depending on the shot,” said Hybride visual effects supervisor Joseph Kasparian. “We needed to make sure that each shot was esthetically pleasing and well balanced because the environments play a huge part in immersing the audience into this visually spectacular fantasy world.”  Hybride artists were also tasked with animating an alien creature created by ILM, which also meant sharing rendered backgrounds. Hybride also generated several shots for the bus sequence, delivering rendered backgrounds to ILM for scenes where the bus is attacked by a Megaptor — a ferocious beast with six stubby legs and a lobster-like carapace. Hybride’s contribution also includes motion designs for binoculars, market maps, helmet interfaces and UIs for teleportation devices.

“This was our 11th collaboration with ILM and another great opportunity to showcase our creative team’s talent and efficiency”, noted Pierre Raymond, President and Head of Operations at Hybride. “The project was also a huge collaborative effort between the two Hybride locations. Everybody truly stepped up to the plate and made this show a tremendous success.”


Valerian and the City of a Thousand Planets is based on the French science fiction comics series Valérian et Laureline, written by Pierre Christin, illustrated by Jean-Claude Mézières and published by Dargaud.

About Hybride
Hybride Technologies, a division of Ubisoft, specializes in delivering spectacular visual effects for the film and television industry worldwide.

Among some of its most memorable contributions to the film industry are several international mega-productions including Jurassic World, Star Wars: The Force Awakens, Warcraft, Rogue One: A Star Wars Story, Arrival, The Great Wall and Kong: Skull Island.