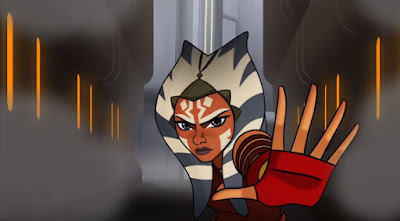 Episode four of the micro animated series, Star Wars: The Forces of Destiny is now up on Disney's Youtube channel and today we are at Coruscant where we join Ahsoka Tano (voiced by Ashley Eckstein) late for her own ceremony it seems.  Her journey obviously isn't going to be straight forward and if you live on Coruscant and wonder why you have no running water, you can blame the dual lightsaber wielding padawan.

If you miss The Clone Wars then this episode will certainly give you a brief fix.  We even get a "Snips" from Anakin Skywalker. (voiced by Matt Lander.)  Man! I miss that show.

Catch up with The Forces of Destiny previous episodes: