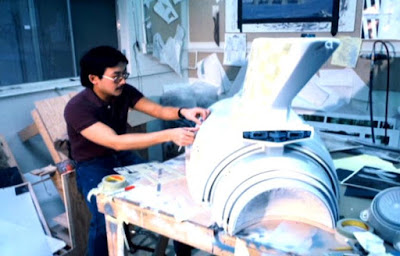 I Came across this gem of a video showing how the special effects were created for Star Trek II: The Wrath of Khan.  There are a bunch of interviews with staff from Industrial Light and Magic and how they came on board straight from working on Return of the Jedi.  There aim was to bring the special effects to life but have a balance that would still look part of the Trek universe created in the sixties TV series.

An interesting part is how they explained that a test screening for the movie was given and instead of incomplete visual effects or animanics they would just insert the storyboard where a visual effect was to be shot.  They said it worked better and the audience totally got it.

The epic nebular shots from the movie especially during the main battle at the end are all explained and how they used salt to give the illusion and how the Reliant model was made smaller than the Enterprise to make it easier to move around.

It's a really informative video and worth a watch just to find out how they used raspberry jelly with the Ceti Eel.

Wow!  I got all this way without mentioning the infamous Genesis CGI.  Of course it's on here.