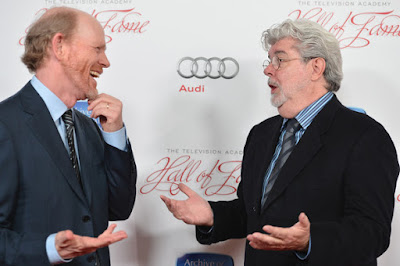 Today Lucasfilm announced Ron Howard as the new director for the standalone Han Solo movie which will hit screens next year.  It's not the first time Howard was offered the director's chair for a Star Wars movie.  He was offered the big seat for one of the prequels.  In an interview on Happy Sad Confused podcast last year he revealed how he was approached by George Lucas:

“He did, he did [ask],” Howard said. “He didn’t necessarily want to direct them, and he told me that he had talked to [Robert] Zemeckis, he talked to me, he talked to Steven Spielberg. I was the third one he spoke to. They had all said the same thing, ‘George, you should just do it!’”

And by the sounds of it. Howard didn’t even really consider it. He said “Willow” was his “least personal” film because it was in service to Lucas’ vision and added about “Star Wars”: “I don’t think anybody wanted to follow up that act at the time. It was an honor, but it would’ve been too daunting.”

He also mentions that he has been offered Superhero movies and turned them down too:

“I’ve had opportunities over the years, and I really feel like that you shouldn’t make a movie as a kind of an [intellectual] exercise,” he explained. “And I was never a comic-book guy. I like the movies when I see them for the most part, especially the origin stories. But I never felt I could be on the set at 3 o’clock in the morning, tired, with ten important decisions to make, and that I intuitively on a gut level know what the story needs. It’s a little bit different tone. … For me, I’d be copycatting, and not inventing. So I’ve just never said yes to one.”

Well, it seems that he doesn't feel too daunted by the prospect of this latest Star Wars project.  Lets hope his talents shine through.  Time will tell.