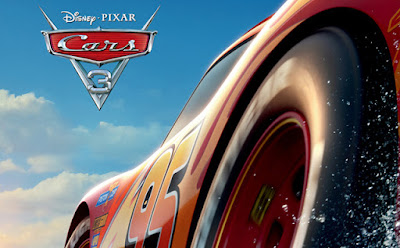 The fact that a series of films about about talking cars has been repeatedly dismissed for being strictly for kids speaks volumes about how much Pixar accomplished in it's first decade. It has challenged the notion of who animation is aimed at, and whether animation for grown ups has to be "adult" in content. It's dealt with strong characters and deep stories. and given us masterpieces like Toy Story, Up and Inside Out. But there's nothing wrong with animation aimed at kids, especially when it's well done, and the Cars series is one of the most popular among children, and it's easy to see why, with the colorful characters,  It also has a lot of heart and soul to it in ways that children can understand. No, it doesn't have the depth or wit of Pixar's very best works, but it knows its audience. if it hasn't earned your love, that's understandable, but it certainly hasn't earned your hate. If you really don't care for the series, don't go see this one. Unless your kids want you to take them, in which case you need to suck it up, because, well, they put up with you.

After the second entry in the series veered off track a bit by shifting too much focus onto Mater (Larry The Cable Guy), who is better in smaller doses, and became a an action spy movie, Cars 3 goes back to the manufacturer specs in being a racing movie centered around Lightning McQueen (Owen Wilson) and showcasing a bit more of Radiator Springs, though it does follow McQueen across the country.

As the film begins, McQueen is now a veteran racer preparing for another Piston cup, and a younger competitor named Jackson Storm (Armie Hammer) is trying to get under his . . . well, not skin. Paint? primer? Decals?  . . . by taunting him about being old and past his prime. And indeed, the newer vehicle is definitely showing everyone up with his sleek look and high technology training routine. He is the next generation of car racing and very sure of himself.

If you have seen any of the the trailers, you already know that he pushes McQueen to the limit in their big race, and our hero suffers a spectacular crash that brings the future of his racing career into question.  There are those who want him to hang up his racing tires and move on to retirement and being a spokescar and brand name, especially Stirling, the new owner of Rusteeze (voiced by Nathan Fillion.). But as always, MacQueen wants to do things on his own terms, and he aims to  race. Stirling and Mcqueen cut a deal, and mcQueen is assigned to a new trainer named Cruz Ramierez (Cristela Alonzo), a plucky young go getter who makes McQueen even more self conscious about his age than Storm does. The two are not exactly a perfect match, but if they want to make it to the finish line they have to do it together.

This is definitely not the kind of movie you go to expecting big surprises, and most of what you haven't seen in a previous Cars movie, you've seen in a Rocky movie. This is something you go to so you can have a great time as a family, and you most certainly will. what Cars 3 may lack in originality it more than makes up for in heart, and the themes of age anxiety and finding fulfillment in helping others achieve their goals are genuinely insightful, And while the sentiment may be piled on a bit thick (particularly in regards to Doc Hudson, McQueen's late mentor who was voiced by the great Paul Newman), it's heartfelt. There are also plenty of laughs and action to keep the kids happy. The addition of a strong female role model also opens up the appeal and the value (though the same crowd who railed against the second film for bringing up the issue of alternative fuels will probably feel that having a Hispanic female who can be good at things is insidious.).

Owen Wilson seems to be enjoying returning to the character, and he and Cristela Alonzo show a strong chemisty (whether their voices were recorded seperately or not.). Cooper is wonderfull in the role of Doc Hudon's old trainer, and Fillion is a welcome addition, even if the part doesn't truly allow him to flex his comic muscles. The one aspect of the voice cast that is really a shame is the return of Chick Hicks minus the voice of Michael Keaton, who has a much busier schedule these days. Director Brian Fee does a fair job stepping in as the voice, but it's lacking something.

Randy Newman's musical score is worth the ticket price in and of itself, and of course the animation is spot on. All in all, this is a very satisfying end to the series (assuming it is the end), and one of the more enjoyable films of the summer, even if it isn't up there with Pixar's very best. It's a very good piece of family filmmaking thst is well worth your time.