Movie Review: Tom Cruise Shouts "Show Me The Mummy!" But Gets A Tepid Response 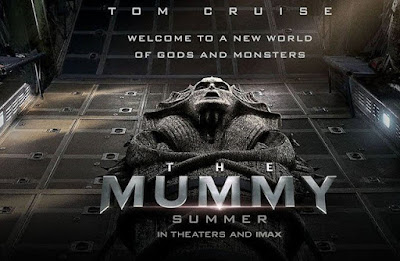 There was a crowd that felt quite let down by Stephen Sommers remake of The Mummy because they got a campy Indiana Jones knockoff. But there was an even bigger crowd (of which we were part) that didn't even have the movie on their radar but ended up finding it to be a joyously fun popcorn  flick, and it has a place in movie history if for no other reason than the fact that the phrase "I actually liked The Mummy better than the new Star Wars" was spoken so many times. Either way, there is no denying that the franchise fizzled out, and not long after the National Astronomical Society declared that Pluto was no longer a planet, they added that Brendan Fraser is no longer a star. But it still seems a bit soon for another remake, and the only reason we're getting one is that Universal is looking to bring all of their classic monsters back from the dead in one giant Marvel style shared universe (if there was a way to turn Pitch Perfect into a Marvel style shared universe, Hollywood would be working on such a thing), and they decided that unwrapping one of their more recognizable and reliable hits again was a good way to get things officially started (apparently Dracula Untold doesn't count as official because it bombed.). \As shared Universe ideas go, the Universal monsters is a promising one. After all, a case can be made that this was Hollywood's original shared universe. But Universal is going to have to do a lot better than this to make people line up to see another Dark Universe entry.

This movie starts out feeling like a complete rehash of the 1999 version, with flashbacks to ancient Egypt, telling the origin story of Ahmanet (Sofia Boutella), the daughter of Pharaoh, who committed an unspeakable act in order to rule Egypt then and forever (it even has the voice over narration, but this time it's Russell Crowe rather than Oded Fehr). It goes on to introduce our roguish hero (Tom Cruise) and his comical and somewhat cowardly sidekick (Jake Johnson) serving in the military and getting themselves into trouble, when suddenly they stumble upon something truly unexpected in the desert. Sound familiar? Does it bring to mind watching Martin Sheen trying to find a way to tell Andrew Garfield "with great power comes great responsibility' without actually using those words?

Cruise plays Nick Morton, a Sargent in the U.S. Army stationed in Iraq, who likes to try to find valuable antiquities before the locals can get their hands on them. In his unscrupulous quest to do so, he literally screws over Jenny Halsey (Annabelle Wallis), an archaeologist searching for an important find. But Halsey (and the Army) catch up with Nick and his partner in crime just in time to claim their discovery: an ancient tomb that appears to be Egyptian in origin. 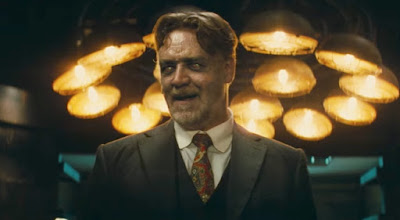 On the plane ride back, all hell breaks loose, and our reluctant heroes (for lack of a better term) are thrust into a "new world of gods and monsters". What begins as a by the numbers remake suddenly shifts gears into something different, and for a very brief moment, it seems like it might become interesting. But alas, it just becomes a rushed and incoherent mess, and Universal packs in as much setup for other movies as they possibly can. Perhaps nothing personifies this more than the presence of Crowe as Dr. Henry Jekyll and his famed alter ego, who have no place whatsoever in this story. Crowe seems to be aware of this and gives quite possibly the most half-hearted performance of his career, faring slightly better as Hyde than as Jekyll but still failing to make anyone care. Everything about the performance suggests Marlon Brando later in his career ("What is this dignity of which you speak? Can I eat it?), and when you compare this to his wonderful comic turn in last summer's The Nice Guys, it's really quite sad.

When it comes to Tom Cruise as an actor, there are two schools of thought, known as "Our Opinion" and "The Wrong Opinion." Regardless of his off screen persona, he's got a great star presence and he gives each performance everything he's got, focusing on "in the moment"believability over relying on quirky antics, mascara and putting dead birds on his head to prove he's sexy, and he throws himself into every action hero role with gusto and a ridiculous level of commitment. He also makes shrewd decisions about what projects to attach himself to, to the point that you can generally take it as a given that a Tom Cruise movie will deliver. That being said. there's just nothing interesting about his character here, and it never really clicks. It's nice to see him playing a scoundrel instead of the brilliant charismatic best of the best of the best, but the character doesn't have enough foundation or backstory to feel like he's real. It's also getting to a point where seeing the 50 something star paired with actresses young enough to be his wife is just embarrassing.

We'd really like to tell you  that the real star of this is the beautiful and mesmerizing Sofia Boutella as Ahmanet, but the truth is she's an incidental character, In stark contrast to Wonder Woman, this movie seems to be having a constant argument between "She's a badass" and "Bad? Dude, have you SEEN her ass? Let's take another  fleeting, PG-13 glance at it ." This is a shame, because while Boutella is undeniably sexy, her delightful supporting turn in Star Trek Beyond proved there's a lot more  to her than that.

Probably the closest thing to an actor making a solid impression in this movie is Jake Johnson as Vail, Nick's sidekick. Universal has promised that there would be more of an attempt to make this incarnation genuinely scary, and of course these days that means a crapload of zombies (and it takes very few zombies  to turn a movie into a load of crap.). Johnson does his best to make this fun by seeming to be under the impression that he is Shaun of The Dead, but it's hit and miss, and Johnson isn't given material that allows him to really shine like he does on the sitcom New Girl or in his goofy, scene-stealing turn in Jurassic World. As far as the "genuinely scary' boast, they don't even succeed at the kind of jump in your seat moments that Kong: Skull Island was crammed so full of, and the only thing "genuinely scary" about this film is that Cruise has finally managed to get involved with an even bigger waste of time and money than Scientology.

Director Alex Kurtzman, one half of the Hollywood powerhouse writing team of Kurtzman and Orci (specifically, the Kurtzman half) does a relatively capable job, all things considered, and shows a certain degree of promise, but he seemed much more comfortable with his last film, the more character oriented People Like Us. In fairness to him, this is such a haphazard and manufactured commercial effort that the director is barely in charge and gets little chance to distinguish himself. But with the combination of Kurtzman, Cruise and writers David Koepp (Jurassic Park. Mission: Impossible, Indiana Jones and the Kingdom of the Crystal Skull, Angels & Demons) and Christopher McQuarrie (Mission: Impossible - Rogue Nation, The Usual Suspects, Edge of Tomorrow), you're getting a creative team that has pretty consistently provided highly watchable films, if not always truly great ones. The fact that the four of them couldn't do better than this says a lot about how much the studio micromanaged this into the kickoff of a business venture as opposed to being a film, and while Cruise was able to pull in his current favorite collaborator, McQuarrie, the lack of  a producer credit for Cruise shows that his creative control was more limited than it usually is for his action blockbusters,

The Dark Universe may yet recover. After all, Wonder Woman took the DCEU from what most of us considered a lost cause and made it an exciting prospect again. But of all the shared universe projects, only Marvel knew that to hook us into their universe they had to start by making a great stand alone movie. It took DC four movies to get there, but without the goodwill attached to characters like Batman to draw people in, the Dark Universe isn't going to get that chance. We give them one more opportunity at most before the whole thing ends up in the graveyard of would-be franchises. As for us, we're off to watch Brendan Fraser and Rachel Weisz actually have some fun fighting a mummy, and feel less embarrassed than ever before about how much silly fun we have with it.