Movie Review: "The Beguiled" Is As Interesting As It Is Forgettable 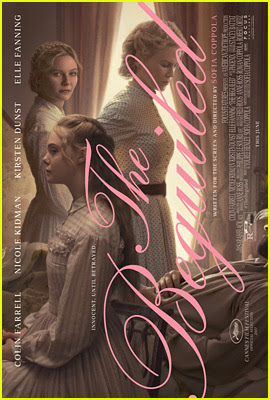 Don Siegel and Clint Eastwood's 1971 Gothic melodrama The Beguiled is pretty well respected film that received favorable reviews, despite being essentially a rather silly, steamy, exploitative thriller with misogynistic themes. Siegel himself said that the story was about "the basic desire of women to castrate men" (and in fairness, I do think a lot of women would like to castrate Siegel and Eastwood after seeing just the trailer for this film.). It's a "hell hath no fury like a woman scorned' story with a bit of a chauvinistic sexual fantasy element (but otherwise, it's very progressive.). But that was 1971, and the way we view woman has changed since then (most people use the internet now.). Sofia Coppola, acclaimed director and daughter of the late Francis Ford Coppola (if he is not dead to you, you clearly never saw Twixt) won Best Director at the Cannes Film Festival for her remake of The Beguiled, which has been switched around to tell the story from the point of of the female characters, and it has taken out some of the more outlandishly lurid plot elements (no incestuous past for any of these women.). It's the same story, and yet it's really not.

Late in the Civil War (around the time of Sherman's March), Miss Martha Farnsworth (Nicole Kidman) runs an all girls boarding school in Mississippi, where she, the students and the teacher, Edwina (Kristen Dunst) are living a quiet existence, going about their daily routine, isolated from the rest of the world as the war rages on. One day as young Amy (Oona Laurence) is picking mushrooms, she comes across a union soldier with a badly wounded leg and a ridiculous set of eyebrows. The soldier (Colin Farrell) introduces himself as Corporal John McBurney, and between his Irish charm and the young girl's sweet nature, the decision to take him back to the school for help is quickly made.

Upon reaching the school, McBurney collapses, unconscious, and Miss Martha has to make a quick decision: should they take care of this man? Christian duty wins out over Southern pride, and they tend to his wounds, with Miss Martha performing crude but effective surgery on his leg.

As McBurney starts to heal, the women keep him locked in the music room, and the excitement and titillating sense of danger at having this mysterious (and handsome) stranger as a patient/prisoner starts to effect everyone in different ways: preteens Jane (Angourie Rice of The Nice Guys) and Marie (Addison Reicke) think this man is a dangerous Yankee who is their enemy and must not be allowed to stay, even suggesting that he should be hung. Alicia (Elle Fanning), the over sexed teen teen bursting into womanhood, suspects that McBurney is pretty well hung as it is and wants him to stay, and Emily (Emma Howard) goes along with her. Edwina doesn't know what she thinks (or at least does not express it) and Miss Martha will ultimately make the decision herself, though if there is one opinion she listens to most seriously, it is that of young Amy.

It doesn't take long before the presence of this man in this house starts to bring out various agendas among the women, and he is only too happy to play to those agendas if they will work in his favor. He attempts to romance Edwina, tends to the garden in hopes of gaining Miss Martha's favor, and he tells Amy that she is his best friend of all of them. But as McBurney becomes more accepted into the household, it appears that the wounds between North and South may be starting to heal, at least here at Miss Martha's School, and everything may work out well for everyone.

Obviously, if everything worked out, there wouldn't be much of a story, and when things go wrong, they go very wrong. The story takes a dark turn, and everyone starts to question each other's motivations, and a whole new Civil War threatens to to engulf the school.

The performances are all very strong, with Kidman, Farrell and Laurence (Southpaw, Pete's Dragon) as the clear standouts .Kidman's Miss Martha is very differently from the character portrayed by Geraldine Page in the original, and the interplay between Kidman and Farrell is great, especially when the two seem to letting barriers down and communicating honestly. Unfortunately, the script tends to largely give the cast stock character types instead fully realized characters, especially Dunst and Fanning (who plays role Dunst would have played if Coppola had made this movie in the early 2000's.).

The film is more successful an exploration of loneliness and longing (and the desperate of obsessions we develop with what we think we are missing) than it is as a character piece, and Coppola sets up an atmosphere that is moody and for the most part rather bleak. But there are moments that are quite pleasant, enough to make you reach a point of wanting this to go in the direction of a happy ending, and that is exactly when Coppola pulls the rug right from under you. And she does it very well. The atmosphere of sexual tension throughout is a palpable, but far more restrained than you might expect. Coppola tries hard to keep the exploitation element minimal, and succeeds in doing so (except when she fails.).

The cinematography is gorgeous, and while it's a very small film devoid of flashy money shots, it's very technically skilled, and the pacing is tight. The biggest shortcomings come in the uncomfortable feeling that some aspects of the story, particularly Elle Fanning's character, are ill timed given the current rape culture debate, and in the total absence of any references to slavery in the South. The original film featured a slave as major character, and but Coppola has stated that she didn't want to portray slavery in a light-hearted way. It's a good argument for removing the character, but it's a further example of the awkward modern compromise of having two types of American history fiction: stories in which all slave owners are all snarling jackals, or those where it appears that ownership of slaves was confined to a very small section of the South and that anyone who was educated and remotely civilized steered clear of the practice. If we are ever going to really face the issue, we have to accept that it wasn't just the overt villains who owned slaves. It's a shameful part of our history as a whole that isn't confined to just a few villainous white supremacists. While part of me thinks that dealing with this is outside the scope of the story, we have a Union soldier staying in a southern household where everyone is becoming divided: there was plenty of room to do something with it, and it could have added a strong dramatic element to the film.

On the whole, The Beguiled is a pretty standard entry in Coppola's filmography: interesting but forgettable with great actors playing cardboard characters. Still, it's a welcome change of pace in an explosion and CGI heavy summer. It's an involving and highly watchable film that is worth a look.