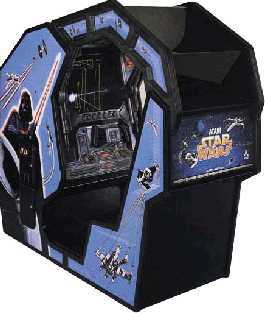 Ever since I first watched Star Wars in 1977 I’ve wanted to be part of that wonderful and mysterious galaxy far far away.  In the beginning my Kenner Star Wars figures helped me with that craving but it wasn’t until I was on a British holiday camp in the early eighties did I realise there was another form of entertainment that could overload your senses and place you right in the middle of the Death Star attack.  Of course that medium was video gaming and it all started with the Star Wars Arcade machine.

I was at a Pontins or Butlins holiday park in the early eighties and in the small arcade room that they had, were the usual array of pinball machines, fruit machines and the odd video games machine.  Defender, Space Invaders and Galaxian were the standard for those days.  But something caught my eye or rather my ears.  I could hear the familiar Star Wars theme being played.  I scanned the room eagerly, trying to determine where it was coming from and then I saw it!  There in the middle of the room was this thing of beauty.  A sit down Star Wars video game complete with yoke controls, stereo sound and wonderful artwork plastered all around the machine.  I immediately sat inside.  It felt good.  The outside noise seemed to disappear as the speakers behind you played a rendition of the classic John Williams score.

You assumed the role of Red Five in his X-Wing.  Your mission was simple.  Destroy the Death Star.  I knew then I was going to be spending quite a bit of money on this piece of art.  I looked at the 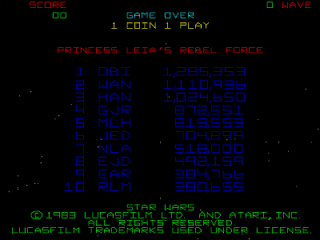 names scrolling up displaying the highest scores.  I was determined to get my name or at least my initials on ‘Princess Leia’s Rebel Force’ hall of fame.  The speakers blasted out the music and even quotes from the movie.  As I placed my ten pence into the machine I heard Luke say “Red five standing by.”  I had goose bumps.

Coin after coin disappeared into the machine.  Slowly but surely I got better.  Fending off waves of Tie-Fighters, blasting towers on the surface of the Death Star and eventually powering my way through the trench run leading to my opportunity to destroy this huge battle station.  Ben would remind me to use the Force and in fact if you could get through the trench run without blasting anything except the exhaust port you would get a bonus for using the Force.  I always tried this and for a brief moment I actually thought I was strong with the Force.

Some people would stop and watch as I delivered a bitter pill to the Empire.  It felt good.  I felt part of the universe and was making a difference.  Never have I been so immersed in a Star Wars environment outside of watching the movies.  You started the game with nine shields and every time you were hit by a firing Tie-Fighter or hit a tower you would lose a shield.  R2-D2 was with you and 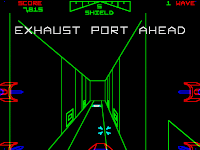 would scream when shields were getting low.  “R2 try and increase the power” could be heard over the action and the familiar John Williams music.  Once you destroyed the Death Star you would start all over again with difficulty increasing every time but not before you witnessed a spectacular explosion of white circles on the screen representing the destruction of the Death Star and Han Solo screaming “great shot kid that was one in a million.”  Ben would chip in too and tell you “the Force will be with you, always.”  It felt good.

Eventually I got my name on the top of the list.  RJW was displayed proudly and stayed there for the rest of the day until they switched the machine off.  Never mind, I would start all over again tomorrow.  I spent a lot of money that week on that video game.  Getting into a lot of trouble with my parents for wasting all my pocket-money on this fine machine.  Day after day while on the holiday camp I would wait for the arcade room to open, arm myself with ten pence pieces and head over to face my mission.

The Atari Star Wars arcade game was released in 1983 and was my first encounter with Star Wars video games but certainly wasn’t my last.  It opened the door to the start of my gaming addiction.  It showed how good a video game could be, especially a Star Wars one.  I think throughout the years from the eighties to modern time I have played every Star Wars game that has been released.  Some, captured the magic of the movies while some have sunken quicker than an X-Wing in a swamp.  But it was the Star Wars Arcade machine that first opened my eyes to the wonders of Star Wars video games.  It was frantic, action packed and felt authentic to Star Wars.  The graphics were something called vector graphics which basically meant line graphics and geometric shapes to represent Tie-Fighters and the Death Star.  It worked beautifully and even to this day I don’t think it looks that bad. 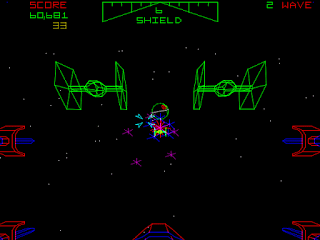 I’m not alone either.  Some well-known people are fans of the Atari Star Wars Arcade game and one famous movie director in particular, Steven Spielberg.  During a regular visit to Lucasfilm in the early eighties he set his eyes on the Star Wars arcade machine that just happened to be taking residence.  Little did Spielberg know that the machine that was at Lucasfilm was being used and studied by Peter Langston (Ball Blazer and Rescue on Fractalus!) who was there for Lucasfilm Games (later to be Lucasarts.)

Lucasfilm actually had little involvement in the Atari arcade machine but the machine was shipped to them for reference and for Langston to study.  After studying the manual he discovered a switch that would convert the game into debug mode and allow all sorts of options to be applied.  One in particular was the option to freeze the game and using the fire button you could advance the scene one frame at a time and still move the cursor on-screen and blast away those Tie-Fighters.  Langston loved this feature and added the option to the cockpit and labelled it “The Force.”

A few years later Spielberg once again was visiting Lucasfilm and asked if he could borrow the game while filming Indiana Jones and the Temple of Doom to help with the quiet periods.  Well of course Spielberg fell in love with the machine and decided to order one for himself.  When the game arrived at his home he was immediately on the phone to Atari, the makers of the game asking where the “Force” button was.  Atari had to explain to the director that this feature wasn’t part of the original game. 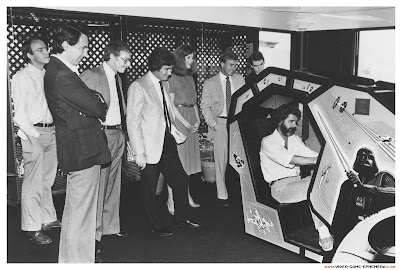 George Lucas tries out the sit down version of the Star Wars Arcade machine.

The sit down Atari Star Wars Arcade machine was the first arcade game I ever played, at TimeZone in Brisbane City in 1982.  It was a thing of legend and remained there a decade later even when much more advanced technology took over the old vector games.  It was just a classic experience so close to the feeling of flying an X Wing that fans kept it around.
Almost 30 years later I have a stand up version of the game, a mint condition cabinet version that has moved with me all around the world.  It is still the one treasure in my life I’d try to carry on my back in a fire!  It’s also a guaranteed way to make visitor’s mouths drop open in awe.  It’s amazing.
Naturally when I left the holiday camp I wanted to continue my X-Wing adventures.  Inevitably due to the success of the arcade version there were numerous home conversions of the arcade game too.  Parker Brothers brought out a conversion for the Atari 2600 and other 8-bit consoles.  Obviously they weren’t a patch on the original but it was incredible to be able to play this classic game in your own home.  Every console or home computer format that came along seemed to have a conversion of the game.  Spectrum, C64, Amiga, Atari ST and others.  Even now there is a modern version loosely based on the original for mobile devices called Star Wars: Trench Run.

Atari 2600 version. Obviously the graphics were more basic than the original