PIRATES OF THE CARIBBEAN: SALAZAR’S REVENGE SPECIALLY FORMATTED FOR IMAX 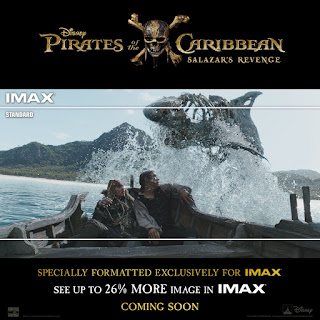 New GIF Illustrates How Fans will Experience 26% More of the Image Exclusively in IMAX
Ahoy, Matey! Pirates of the Caribbean: Salazar’s Revenge sails into cinemas May 25th and movie-goers will get to experience more of Captain Jack Sparrow’s voyage in IMAX. Only in IMAX will the entire film be specially formatted and presented in an expanded 1.9:1 aspect ratio. This means that the movie will fill more of the screen, and fans will see 26% more of the image in IMAX than standard theatres, making for a moviegoing experience fans will treasure.
To illustrate the expanded aspect ratio, IMAX created a GIF and a special image that depict what movie-goers will see in standard theatres versus what they will see in IMAX.
The IMAX release of Pirates of the Caribbean: Salazar’s Revenge will be digitally re-mastered into the image and sound quality of The IMAX Experience® with proprietary IMAX DMR® (Digital Re-mastering) technology. The crystal-clear images, coupled with IMAX's customized theatre geometry and powerful digital audio, create a unique environment that will make audiences feel as if they are the first mate aboard the ship.
About Pirates of the Caribbean: Salazar’s Revenge:
Johnny Depp returns to the big screen as the iconic, swashbuckling anti-hero Jack Sparrow in the all-new Pirates of the Caribbean: Salazar’s Revenge, a rip-roaring adventure that finds down-on-his-luck Captain Jack feeling the winds of ill-fortune blowing strongly his way when deadly ghost sailors, led by the terrifying Captain Salazar, escape from the Devil's Triangle bent on killing every pirate at sea—notably Jack. 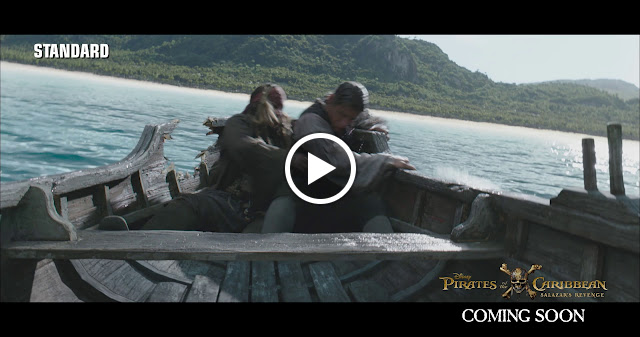