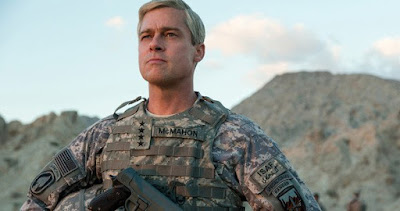 Brad Pitt isn't the sort of actor we associate with drastic transformation. He's given a lot of very good performanes and even some excellent ones, and he's consistently engaging and compelling. But he's not an actor who disappears into different mannerisms or character voices with each role. And that's okay: for the most part I find those actors to place the technique over the soul of the performance, and I'm rarely moved by their work. Give me a Brad Pitt, Tom Hanks or George Clooney who make me think of and relate to their character as a fully-realized human being any day over a Johnny Depp who is self-concously absorbed in showing us how quirky or "versatile" he can be. But the downside is that when an actor whose persona we know as well as Pitt's does attempt that kind of transformation, those layers of artifice somehow make us more inclined to just see the actor underneath and keep us distanced from the character. And that's the problem with Pitt's portrayal of an ambitious general in the Netflix original film War Machine. 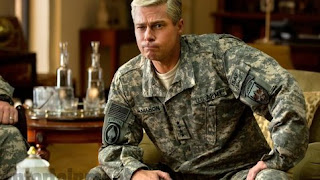 Pitt stars as Gen. Glenn McMahon, commander of U.S. Forces in Afghanistan (McMahon is a fictionalized portrait of General Stanley McChrystal). In the early days of the Obama administration, McMahon runs a "counter insurgency" campaign, trying to win over the hearts and minds of the Afghani people to the American occupation and way of life. But, as journalist Sean Cullen (Scoot McNairy) points out in his voice over narration, it's hard to make yourself beloved in a country you've invaded. The story is framed around a fateful interview McChrystal did with Rolling Stone magazine (Cullen is a fictionalized version of writer Michael Hastings), and seems to be largely a tale of ambition and hubris bringing down a powerful man. It's a Greek tragedy told in the form of either a drama with comic elements or a satire with dramatic elements,. and while it has moments of success as both, it never entirely settles on its tone or point of view well enough to succeed fully as either. And the unfortunate miscasting of Pitt is part of the problem: the actor speaks in a less than convincing "tough as nails" bark that's clearly modeled on George C. Scott (equal parts George Patton and Buck Turgidson) and his hair has been grayed, but he still has the same magazine cover face and svelte movie star build. Despite giving it his all, he never takes us to the necessary suspension-of -disbelief level to forget that we're watching Brad Pitt the actor, and that keeps us from caring as much as we should about the fate of Glenn McMahon the general.

Writer/Director David Michod keeps things moving well enough, and provides some powerful sequences, such as a disgruntled young soldier experiencing a devastating tragedy after breaking from orders on a mission, or an amusing extended cameo by Ben Kingsley as former Afghani president Hamid Karzai, or one jaw-dropping moment where McMahon discovers why U.S. policies force local farmers to grow heroin instead of cotton.  But as with too many of Hollywood's war on terror movies, we're left unsure what exactly the film is trying to say. The futility of the counter-insurgency approach is explained so well and so succinctly that we don't feel we need the rest of the film to illustrate it, and it gets a little tedious just seeing McMahon and his team continuing to do things that obviously aren't going to work. 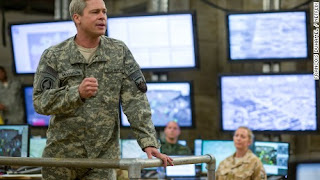 While War Machine isn't fully successful as a film, it's a worthy effort for Netflix as it continues to work toward being as big a force in feature films as it is in series television.  This is a slick, well-made film with strong production values and A-list talent both in front of and behind the camera, making the sort of mid-budget character oriented fare that's becoming distressingly rare in the blockbuster oriented Hollywood of today. Here's hoping Netflix will continue giving us this kind of film, and that next time they hit the busllseye.