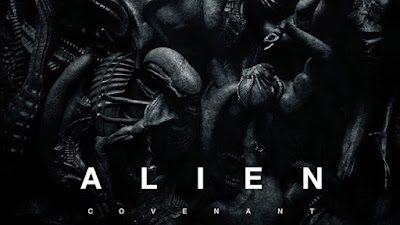 Director Ridley Scott's 2012 science fiction film Prometheus  received a mixed reception from critics and audiences alike, and with good reason. The ambitious and cerebral prequel to Scott's classic Alien was visually sumptuous, smart and thoughtful . . . except for when it was too busy being a pretentious, overwrought melodrama. The movie ranged from feeling like something Arthur C. Clarke would write to something that would appear on Mystery Science Theater 3000. Some loved it, some really hated it, but most were conflicted. Either way, the one thing that seemed pretty clear was that no one was clamoring for a sequel. No one, that is, except for Ridley Scott. 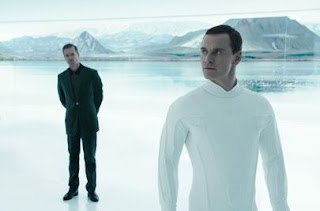 Right from the title, it is clear that Alien: Covenant is going for a much more straightforward entry in the franchise, and Scott has paid close attention to fan reaction. This film doesn't aim to be much more than a horror movie in space, and in some ways that's a very good thing, but there is a feeling that it could have been something more. It's definitely going for a return to the feel of the original (Jed kurzel's score is pure Jerry Goldsmith), and incorporating a little of the action of James Cameron's blockbuster follow up (but only a little.).

The film begins with a pre-Prometheus sequence of the android David (Michael Fassbender) meeting his creator, Peter Weyland (Guy Pearce) for the first time. This serves the dual purpose of introducing David for those who either didn't see or don't remember the last film, and of giving some kind of answer to the "What the hell?" heard round the world when Pearce previously showed up as the octogenarian version of Weyland  (in full Montgomery Burns make-up) instead of a distinguished actor that was at least within decades of the right age. (It is probable that Scott originally intended to do more with the character before he got such poor audience response.).

From there, we jump forward to deep space in the year 2104, as the good ship Covenant heads for the remote planet of Origae-6, carrying 2,000 colonists, over 1,400 embryos and a dream. The ship is crewed entirely by couples (in space, everyone should have someone special to hear them scream), and they are in a state of suspended animation as the ship's android, Walter (also played by Michael Fassbender) prepares to wake them up. This goes off without a hitch, except maybe for the neutrino shock wave that hits the vessel and causes the Captain's sleeping pod to erupt in flames from the inside, roasting him alive. But it's ok, because the Captain is played by James Franco in a cameo appearance, and if there's anyone who is used to sleeping through his entire performance and then getting baked, it's James Franco.

This leaves the Executive Officer, Oram (Billy Crudup) in charge, and he does not have the trust or respect of the crew, including his new second in command, a terraforming expert named Daniels (Katherine Waterston.). Daniels also happens to be the the freshly widowed significant other of Captain Flambé, but circumstances do not give her the luxury or time to grieve, especially when the ship intercepts a transmission that seems to be human in origin coming from a nearby planet. Acting Captain Oram makes the decision to check it out, though Daniels disagrees with the call, believing that he will just crud up their mission.

And of course, this being an Alien movie, not long after our intrepid voyagers set down on the planet, bad things start happening, and pretty soon they are in a fight to survive against an enemy they do not understand. This is when the thrills and chills really start to get underway, and Scott certainly shows that he's still got it, building the tension nicely and producing some good jump in your seat moments, This section of the movie actually feels a bit like The Lost World, and in general it's an interesting bit of irony that while the Jurassic Park franchise owes something to the Alien films, this movie definitely owes a bit to the Jurassic Park franchise, both in terms of sequences that bring the velociraptors to mind, and questions of scientific engineering messing with the natural order of things.

Scott has clearly paid close attention to fan complaints,  and he piles on a lot more gore this time around. The fact that the film is not trying to be anything more than what it is becomes both it's greatest strength and weakness, as it provides plenty of good scares but feels more than a bit empty. It's also about as predictable as a movie like this can get, Every "surprise" can be seen coming from a mile away, and it sticks so close to genre formula that one sequence degenerates into something akin to a Friday the 13th movie. 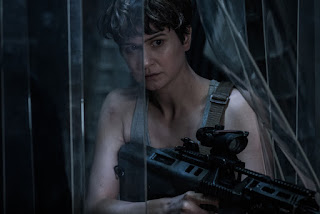 Michael Fassbender and Katherine Waterston, who appeared together before in the excellent Steve Jobs, provide strong central performances from opposite ends of the spectrum, with Fassbender playing the showy and theatrical roles of Walter and David, and Waterston providing the low key humanity as Daniels, this film's Sigourney Weaver surrogate. Waterston is a fine actress with an everywoman quality, and we'd love to see her popping up in more and more films. Crudup really makes the most out of an underwritten role (the story of his career), and Danny MacBride, Carmen Ejogo, Amy Seimetz and others provide able support. But this is definitely Fassbender's film, and a lesser actor would have really given in to the urge to chew the scenery. Whatever you might think of his character(s) (we are still up in the air), there is no faulting the performance,

All in all, this is solid popcorn movie, even if it's not a gourmet popcorn movie like Alien or Aliens. Most of the problems it faces stem from the fact that prequels were a questionable idea for this franchise to begin with, but the mess created by Alien 3 and Alien: Resurrection didn't leave a lot of options. The short lived Neil Blomkamp sequel, which planned to ignore the existence of those two films, seemed liked a promising  idea until CHAPPIE turned out to be one of the worst films of the past 10 years. Besides which, as much as we'd like to erase those films, the fact is they happened, the screwed up the legacy, and we are still trying to rebuild the wreckage that was once our lives. A lie of omission is still a lie.

Alien: Covenant is definitely not a bulls eye, but at least it hits the target. It's not up there with the first two, but it's worth the price of a ticket.