To say that there have been many versions of the Arthur legend on film, stage and the page is more than a bit of an understatement.  The first narrative was written in the 1130's by Geoffrey of Monmouth, but dedicated Arthur lore fans tend to view their favorite version as definitive, whether it be T.H. White's The Once and Future King, Lerner and Loewe's Camelot or the BBC's Merlin. But a legend this vast and long lasting simply doesn't have a definitive version. It's a tale with many variations, and many different ways of being told, and there will continue to be more as long as stories are told and people have a desire to escape into fantasy. 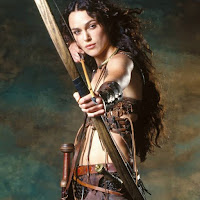 In the last three decades we've had film versions that tended to reflect the cinema of the time: the early '80's saw John Boorman's Excalibur, which was a surreal and visually stunning film but a bit of a mess in terms of storytelling; the '90's gave us Jerry Zucker's First Knight, which was somewhere between Robin Hood: Prince of Thieves and a very tame Harlequin Romance novel. And finally, in the early 2000's, mega-producer Jerry Bruckheimer attempted to cash in on Gladiator with a Roman epic filled with Saxon violence, which proudly proclaimed it was the "real story", in the sense that it was loosely based on a fictionalized version of a possible theory of what might been a real person who may or may not have partially inspired parts of the legend, or not, and featured Kiera Knightley as wild woman bandit version of Guinevere who could disappear into the forest by turning sideways and pretending to be a twig. 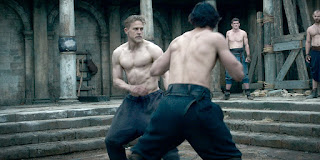 It should come as no surprise to anyone who has been awake this decade that the latest version of the Arthur legend would in some way take the form of a superhero movie (though we're not going to spoil the specifics on how it does so.). It should also come as no surprise to anyone who is familiar with the works of Guy Ritchie that this is a very off the wall take on the story (if Ritchie directed a version of Little Women, he would find a way to make Jo March a part time bare knuckle boxer.). But much like Sherlock Holmes, the pleasant surprise for those who are confused by the trailer is that the director's in your face interpretation of the material actually work pretty well, and it's a lot of fun..

As the film opens, Uther Pendragon (Eric Bana) sits upon the throne, and a war is being fought between men and mage. The evil wizard Mordred (Rob Knighton) is fighting Uther for control of Camelot and all of England. Uther's brother, Vortigern (Jude Law) wants him to make a deal with Mordred, but Uther knows that the mage is not to be trusted. It is not long at all before Vortigern's ulterior motives surface, leaving Uther to try to get his wife and young son out of the castle safely before it is too late. 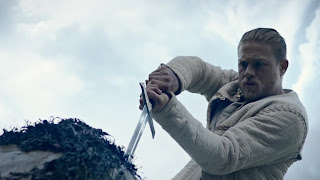 Flash forward more than a decade, and Arthur (Charlie Hunham) is a street tough leading a small gang in Londinium, making quite a name for himself as the kind of guy you really want as a friend and really don't want to have as an enemy. But when King Vortiger starts rounding up men who seem to be the right age to be his long lost nephew, the big fish is plucked out of his small pond and taken to be tested to see whether he is indeed the son of Uther Pendragon. From there, he starts to attract the attention of those who would like to see a change in leadership, including a mysterious young Mage (Àstrid Bergès-Frisbey.).

The film is overlong, and a bit convoluted (we really tried to go a whole review with out using that word) and at times it feels very derivative (every once in a while it seems as if  Jude Law suddenly stepped into Lord of the Rings or Robert Zemeckis' Beowulf). But it's also very entertaining, with some wickedly clever moments that make good use of non linear storytelling techniques, and the pacing is strong. Ritchie is more at home with the grimy world of the common folk than with the elegance of castle life, and in the sections where it plays like one of his cockney caper movies, it has a great deal of silly charm. 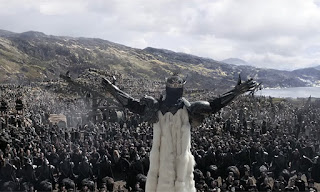 That is not to say that the sword fight sections don't work, but one needs to be prepared that this is an Arthurian incarnation that is completely devoid of romance, and we're not just talking about the absence of a Guinevere love triangle (or even a Guinevere): the grand sense of pageantry associated with Camelot is nowhere to be found, and that is going to work fine for some, but really alienate others . The only moments where you see the grandeur of royalty is in the decadent world of Vortigern, the villain of the piece, and even then it is more imposing than it is enthralling. There is no celebration of nobility to be found here, though the essential need for a kingdom to be ruled by a wise and benevolent leader who cares for his people is still very much a part of the story. 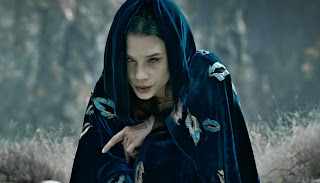 The cast is very capable, with Hunham's usual charming tough guy routine working well enough to sell this roguish take on the character, and Law ably commands the screen as a largely one note villain with a ceaseless lust for power (his monologue about the joys of being feared is definitely the highlight of his performance.). But Djimon Hounsou (Amistad, Blood Diamond) and Aiden Gillen (Peaky Blinders, The Dark Knight Rises, Sing Street) arguably steal the movie as Arthur's cohorts and teachers (with Neill Maskell and Bleu Landau adding support as a father/son thief team you really grow to care about), and the perennially underrated Bana adds weight to the film. Bergès-Frisbey (perhaps known as the Mermaid in Pirates of the Carribbean: On Stranger Tides) is an interesting presence as The Mage, though we never get to really know the character.

The strongest aspect of the movie, by far, is the creative twist that gives it that superhero vibe while still bring one of the aspect that remains firmly planted in the legend, and it's a really great idea.
It really comes down to this: your enjoyment of this movie hinges on whether you can enjoy watching some rather strange (you won't see many Arthur legends that include the character of "Kung Fu George") but inventive playing with the various elements of the legend to create something unique, you may really get a kick out of King Arthur: Legend of the Sword. But you have to be very comfortable with the fact that you're seeing one specific, alternative telling of the tale that is never even trying to definitive, because this is not at all a movie for purists. It's a version more suited for D&D fans and wacky LARPers than the renaissance fair crowd.