Listen to me talk all thing Jurassic Park On Episode 88 Of Ausfans Radio Network. 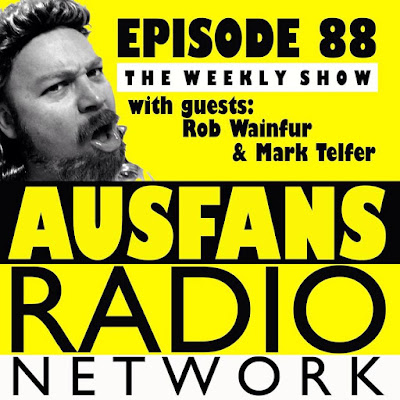 Yesterday I had a blast talking to Alan R. Ryan on the popular podcast, Ausfans Radio Network. We continued our directors series where we talk about Steven Spielberg movies. On this episode we talk about The Lost World: Jurassic Park. Here's the show notes along with the links to the show. - Rob
On tonight's episode we have some films news, history, trivia and a look at a forgotten classic from a great director. Joining Alan is Rob Wainfur of The Bearded Trio & Geek Universal. In our Director Series of special podcasts, we look to Spielberg's franchise. Rob is a true fan of Williams, Lucas & Spielberg and in this episode we look at the Jurassic Park films, and Jurassic Park: The Lost World as we had previously done a special on Jurassic Park which was a lot of fun. We look also at the rest of the series including thoughts on the third and Jurassic World also. Then we have good pal of the show Mark Telfer join us to catch up with some of the latest film talk, look at some classics from the eighties era and talk about films that have been made in Scotland.Ausfans Radio Network: Movie news, reviews & pop culture, hosted by Alan R. Ryan, and guests weekly. Find the cast on: iTunes, Podbean, Stitcher and where all good podcasts can be found. Connect with us:Twitter: twitter.com/arryan_writerInstagram: instagram.com/ausfans_radio_networkBe sure to check the entire back catalogue of podcasts here: ausfansradionetwork.podbean.comLinks:The Bearded Trio: www.thebeardedtrio.comGeek Universal: www.geekuniversal.com#ausfansradionetwork #australia #goldcoast #podcast #movies #tv #reviews #jurassicpark #jurassicparkthelostworld #sequels #retro #eighties #robwainfur #thebeardedtrio #geekuniversal #marktelfer #fandom #spielberg #directorseries #scotland #filmsmadeinscotland #eightiesclassics