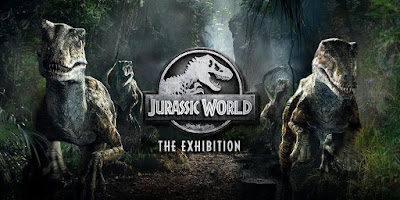 Vacation season is officially here. Planning on taking a trip to Chicago by any chance? For fans of Jurassic Park and Jurassic World, there's a new attraction that is an absolute must for travel itineraries. Be prepared to fully immerse yourself in the world of dinosaurs with Jurassic World: The Exhibition:


This year, not only can you see real dinosaur fossils inside The Field Museum, you’ll be able to imagine what it would have been like to walk among these breathtaking animals in Jurassic World: The Exhibition. Get closer to dinosaurs than ever before in Jurassic World: The Exhibition! Based on one of the biggest blockbusters in cinema history, the Exhibition immerses audiences of all ages in scenes inspired by the beloved film. Now, the park that was only a promise comes to life…right before your eyes.

Travel to Isla Nublar as a VIP guest and explore Jurassic World. Stare in wonder at a towering Brachiosaurus; come face-to-face with a Velociraptor; and get a rare up-close look at the most vicious dinosaur of them all, Tyrannosaurus rex.

Created in close collaboration with renowned paleontologist Jack Horner, the Exhibition is infused with interactive educational elements—drawn from the real-world science of dinosaur DNA that allowed Jurassic World to come to life. Visitors of all ages can now learn all about these incredible prehistoric creatures.

Don’t miss the awe-inspiring journey into Jurassic World: The Exhibition. The Field Museum hosts the Midwest debut of the exhibition starting May 26, 2017.
For more on this exhibit, visit www.fieldmuseum.org.
While at The Field Museum, be sure to pay a visit to Sue, the largest, most complete T-rex ever found.
Still need more dinos? Swing over to the Brookfield Zoo for their Dinos & Dragons exhibit:

Dinosaurs have roared back to life at Brookfield Zoo! They’re bigger and better than ever and they’ve brought some of their mythical dragon friends. The zoo’s new Dinos & Dragons features 17 animatronic creatures, including the Stegosaurus, Apatosaurus, Tyrannosaurus rex, and Chinese dragon.

Along the winding outdoor path, guests of all ages can explore the origins of myths and legends through culture, literature, and paleontology that is illustrated on engaging signage. Inside a tented area, zoogoers can get up-close views of live reptiles, including a Komodo dragon, seen for the first time at Brookfield Zoo!

The temporary exhibit will also have hands-on activities, as well as a dinosaur dissection lab, dino dig boxes, and an excavation site.

See? There's plenty to keep fans occupied as we wait for the next installment in the Jurassic saga!