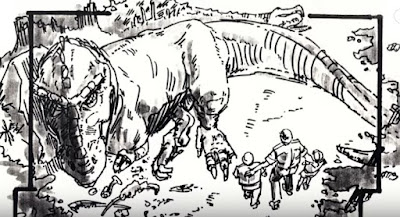 Jurassic Park was a breathtaking film by Steven Spielberg; filled with spectacle, wonder, and imagination. Likewise, the novel and the adaptation process included many inventive ideas. This video presents one of the most famous ideas that didn't make it into the film: "Tyrannosaurus Rex At The Lagoon". Following closely to the tense sequence from the novel, the filmmakers also revised it with their own ideas, more than once. This version appears to be the last of the revisions, before it was scrapped entirely; along with the rest of the "river adventure" that was inspired and adapted into the classic Universal Studios attractions.This video uses the official original storyboards that were contained in Phil Tippett's Early Sequence Storyboard Binder, from his own collection. They have never been publicly seen before. This video was made to dramatize the sequence with original music by Derrick Davis and Mikhail Cucuk, inspired by the John Williams Jurassic Park themes. It is made for entertainment and educational purposes only. Amblin Entertainment and Universal Pictures own any copyrights to the material. See video for full credits of this production.