Movie Review: "Guardians of the Galaxy Vol.2" Is Full of Fun, And More Emotion Than You Might Expect 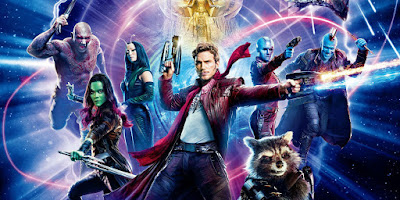 
Marvel Studios, arguably Hollywood's most lucrative and reliable source of of razzle-dazzle popcorn entertainment, outdid themselves with Guardians of the Galaxy, breathing fresh new life into the MCU just when it was starting to get badly needed (we're thinking Thor: The Dark World here.). That sense of boldness and originality is hard to create twice. Ghostbusters and Men in Black struggled with how to recapture the sense of "I've never seen anything like that before" with their respective second chapters, and the blockbuster sci comedy has been a difficult genre for franchises. But Marvel Studios and James Gunn have come through with the spectacular follow up to their unique hit, offering us a sequel that is thrilling and funny, if not quite as fresh  as the original. 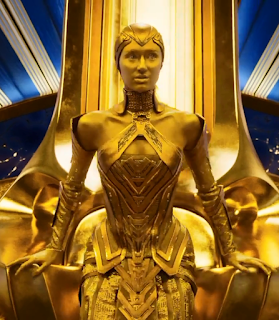 The story begins with the Guardians hired to perform a service for a powerful alien race called the Sovereign (who look like they gotten on Goldfinger's bad side), to protect their precious batteries. But when Rocket makes a very Rocket-ish decision without consulting the rest of the group, the Sovereign's wrath is incurred, and our heroes are on the run. While  running, the group comes across a mysterious figure named Ego (Kurt Russell), who holds the missing piece of the puzzle regarding Peter Quill's heritage. Meanwhile, Yondu (Michael Rooker) has a run in with his mentor and the leader of the Ravagers, Stakar Ogord (Sylvester Stallone), who has never forgiven Yandu for breaking the code by trafficking in children by picking up Quill from Earth for pay,  And Nebula (Karen Gillan) is out to settle a score with her sister, Gamorra. 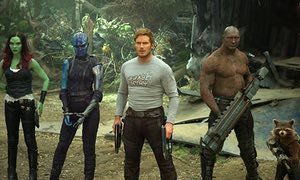 It goes without saying that this movie is fast and very funny, with plenty of light-hearted laughs and thrilling moments. What may come as more of a surprise is how much this falls into the formula of the "middle of the trilogy" formula, giving us a heavier and at times more upsetting story than audiences may be expecting. There's a lot of great character development going on here, and some of the supporting characters who filled a more functional role in the first movie are explored much deeper this time around. But at the heart of the story is the relationship between Quill and Ego, Peter's memories of his beloved mother, and his past in general. It leads in some genuinely unexpected directions, and to some even more unexpected tears, 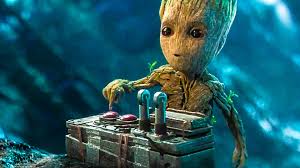 That's not to say that the movie is all dark and brooding. One of the most popular elements of the film is bound to be Baby Groot, and anyone with a 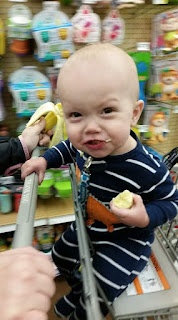 young child is likely to be convinced that the delightful and adorable character is based on their kid specifically, which is of course ridiculous wishful thinking. He is actually directly modeled after Paul's son, Timothy (left) , and that's all there is to it.

The effects and design are outrageous and sumptuous, keeping with the comic book meets movie serial style of the original. Director James Gunn shoots large sections of these films using IMAX cameras, and it's frankly a mistake not to see it in that format, as it is a real feast for the eyes. 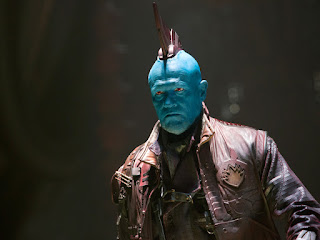 The ensemble is in fine form, with Pratt, Russell, and especially Michael Rooker really standing out. Rooker is a terrific actor, and it was easy to under-appreciate him in the role last time around, but not here. The layers he gives to Yondu, and the mix of comedy and tragedy, are a masterful mix of understated and overt that few could pull off with such expertise.  We first became fans after 1993's Renny Harlin guilty pleasure action flick Cliffhanger, and as such it was especially fun to see him playing again off of Stallone (this is a re-teaming that will be lost on most people, and maybe wasn't even intended by Gunn, but we thoroughly geeked out over it.).

Russell and Pratt have terrific chemistry, and the de-aging effect that Marvel seems to be so fond of isB
used to it's most successful extent so far (any other actor playing a young Kurt Russell would never have worked.). It's actually hard to figure why Pratt isn't in talks for the remake of Big Trouble in Little China, the two are so similar in type.

If there is one area that truly falls short, it is the Awesomeness of "Awesome Mix Vol.2." Part of the issue is the more melancholy nature of the story, and part of it is simply the fact that so many of the bounciest songs of the era were used in the first film, but the music in this one just didn't leave us bopping in our seats. "Brandy" by Looking Glass is very nicely and meaningfully used (even if the meaning of it gets spelled out a but too directly), but otherwise we are hard pressed to name any of the songs that were in the film. This is isn't a major strike against it, but it's hard to picture this spawning a soundtrack album as popular as the original.


All in all, despite feeling a bit unfocused and overblown, this is crowd pleaser that is likely to pull in big bucks, and leaves us excited for a third installment, feeling like the true middle chapter of a trilogy. Thank heavens Gunn is signed on to Captain one more journey.