WATCH: Rogue One: A Star Wars Story, As Told By LEGO 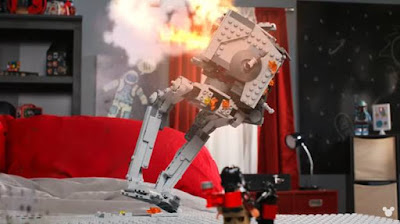 Disney today debuted Rogue One: As Told By LEGO, the second episode of its digital series created in collaboration with LEGO. The charming stop-motion animation video tackles the Lucasfilm narrative of The Battle of Scarif – in just under three minutes. Jyn Erso and her team of Rebels attempt to steal the plans to destroy the Death Star.

This Star Wars-themed episode goes inside the imagination of young Billy, who uses a “briefcase” as the Imperial base on the tropical planet of Scarif to recreate the Star Wars world in his bedroom and bring to life his own epic stories.

“As Told By LEGO” is a spinoff of the popular “As Told By Emoji” franchise (125+ MM lifetime views), which continues Disney’s commitment to storytelling innovation with creative retellings of some of Disney, Marvel and Lucasfilm’s most iconic stories. The first episode, Moana As Told by LEGO, was viewed more than 1 million times since the series debuted last week.