Steven Spielberg's Movie On The Pentagon Papers To Release December 2017. 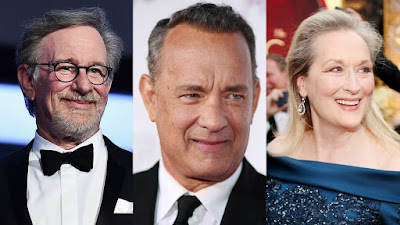 Last month we reported that Steven Spielberg will be teaming up once more with Tom Hanks and Meryl Streep.  The movie will be centered around the Pentagon Papers.  Now we can tell you that the latest Spielberg movie of which most are calling "The Post" will be released on a limited basis on December 22nd with a nationwide release on January 12th, 2018.  Just a quick reminder that the movie is still officially unnamed and "The Post" is a speculative title.

The film will be co-financed by Fox and Amblin Entertainment. Fox will handle domestic distribution; international will be Amblin, through its output deals with Universal, eOne, Reliance and others. With the Fox deal, Spielberg reunites with chairman/CEO Stacey Snider, his longtime partner at DreamWorks. This marks the fifth pairing of Spielberg with Hanks, after Saving Private Ryan, Catch Me If You Can, The Terminal and Bridge of Spies.

The Pentagon Papers was the name given to a secret Department of Defense study of U.S. political and military involvement in Vietnam from 1945 to 1967, prepared at the request of Secretary of Defense Robert McNamara in 1967