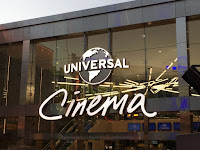 Spielberg was joined by Jordan Peele, Will Packer and Jason Blum who walked the red carpet and teamed up for ribbon-cutting duties at the AMC theater.

"Universal Studios has been part of my life as long as I can remember my life.  I spent a good part of my youth on the back-lot of Universal dreaming of being a filmmaker.  Then it happened.  First in TV and then in Motion Picture.  Later the dream expanded even more when some of the movies became theme park attractions.  I was fortunate to see my movies come to life right here."

"This entire lot, this industry here at Universal has made me very proud.  Universal Cinema defines advancement of technology with this new incredible movie theatre...Movie goers have a rare opportunity to watch movies where the movies are actually made."

Karen Irwin the president and COO of Universal Studios, Hollywood added “The new Universal Cinema is a spectacular place to enjoy blockbuster films and we’re thrilled to have such acclaimed filmmakers join us to commemorate the occasion,”

“As The Entertainment Capital of L.A., we’ve entertained guests for generations, taking them behind-the-scenes of movie-making and placing them in the heart of the action with our incredible attractions, so it’s only fitting that we create the ultimate movie-going experience giving fans access to a movie theatre where they watch films in Hollywood screening rooms the same way filmmakers do.”