Movie Review: Vin Diesel Stays Awake This Time in "Fate of the Furious" 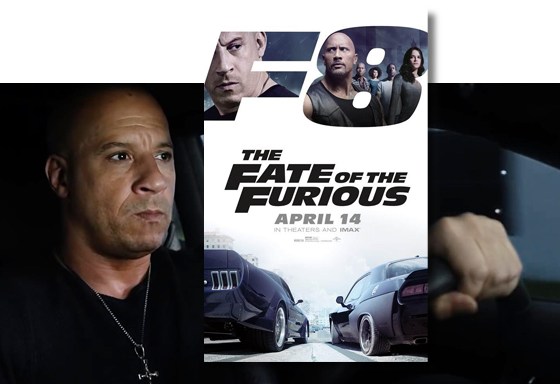 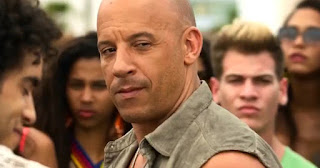 To say that the formula of the
Fast and Furious
franchise is starting to wear thin is a little like saying that Mickey Rourke doesn't quite have the prettiest face in Hollywood anymore. It's become the Police Academy of its time, and each one becomes more preposterous and vague in its premise than the last. But what it has over Police Academy is very skilled action craftsmen having the time of their lives, and that sense of fun is infectious. The over the top cartoon the series has become is more popular among critics than the original, and it has become a reliable, exteme guilty pleasure popcorn franchise. But the fact is, the popcorn is starting to get a bit stale. 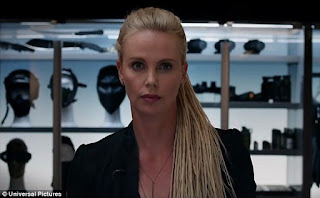 The latest entry in the series has a mysterious cyber criminal named Cypher (Charlize Theron) blackmailing our intreprid hero Dominic Torretto (Vin Diesel) into turning on his "family." Yes, the James Bond/Hannibal Smith/Cliff Huxtable of the tattoos and steroids set has gone rogue. I suppose that this is a huge spoiler to both people on the American and European continents who have not seen the trailer 50 times, so I apologize for giving that away. 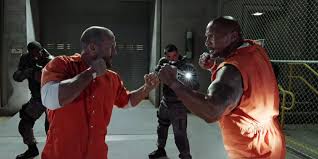 The crew is recruited once again by "Mr. Nobody" (Kurt Russell) to help steal an EMP. But things go south when Dom runs Hobbs (Dwayne Johnson) off the road and takes the EMP, running off with Cypher. The spectacular sweathogs with skills can't believe that their fearless leader would do such a thing, but the proof, as they say, is in the pudding, whatever that means. I would love some chocolate pudding right now. Or even vanilla. Seriously, vanilla is underrated. We tend to unfairly think of it as just "regular", as if it wasn't an actual flavor when it is really very . . . 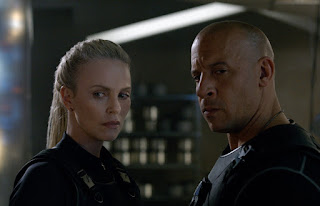 Sorry. My mind is wandering as I write this, but not as badly as it did while viewing the film, and I grudgingly admit that a few elements that made no sense weren't helped by my lack of caring, but regardless, this is as much a "check your brain at the door" action movie as I've ever seen. I was expecting that, but I was also expecting to be a little bit more entertained as well. The novelty of the tongue in cheek self parody this has become is running out, and the presence of respectable actors like Russell, Theron and (I kid you not) Helen Mirren only adds to the feeling that "it is what it is" can only go so far. And the biggest problem is really quite simple: the element of surprise is gone.  Now, instead of walking out of these movies saying "that was more fun than it had any right to be", even critics are going into them with actual expectations to be met. The rather strange question becomes: did these movies actually get to be too much dumb fun for their own good? 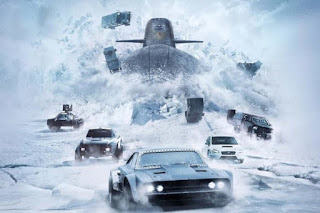 Director F. Gary Gray (Straight Outta Compton, The Italian Job) is a stronger hand with the actors than Justin Lin or James Wan, but he struggles to keep up with the standard they set for the fluid and outrageous action, never truly delivering until the thoroughly asinine but unbelievably awesome finale, which involves a car chases across a frozen ocean and (I kid you not) a nuclear submarine. But deliver he does, quite decisively, and in particular, Gray seems to have nudged Diesel into actually trying again. I'm not saying old Vin is going to be winning any awards, but he brings back at least a spark of the intensity and heart that used to make him an interesting presence (though there is still never a single moment where we catch a glimpse of what it is about the guy that commands the sense of awestruck, testosterone dripping respect and bromantic adoration that pours out of his loyal subjects.). Russell seems more comfortable this time around, and Mirren is slumming but is mildly amusing as Statham's mother. Statham and Theron worked with Gray on The Italian Job, and they all seem to be having fun together. Theron is playing a cartoon villainess, but it's arguably her best cartoon vilainess, and Statham steals the whole movie with a sequence that combines his martial arts skills with an astonishing chemistry between the British action star and a surprise cast member (this is a sequence you wouldn't be surprised to see from Jackie Chan, but it's unexpected and delightful coming from Statham.). In sharp contrast to the rest of Hollywood, Gray tends to view Statham as a charming light comic actor who is most effective when he's smiling. The biggest take away from this movie is that these two need to work together as much as possible.

As for Dwayne Johnson . . . does it matter what I say? Does it mattre what anyone says? Does anyone else think butterscotch pudding is the best? Ok. I'll admit that Moana definitively made me a believer that the guy has talent, but his campiness in these films is usually too much for me. The Mr. T style, musclebound "watch me bench press this cement truck while I eat this tree trunk" moments are groan inducing, and as an actor, he's really quite the opposite of T: instead of awkwardly reciting dialogue as if he doesn't underatand the bigger words, Johnson simply comes across as too articulate to be tossing out "ain't"and "sumbitch" all of the time, and he comes off as a massive poser. Unlike Diesel, Johnson can sell tough and smart, so why not let him be a well spoken bad ass? As for Scott Eastwood, who has been brought on board to fill the hole left by Paul Walker, he doesn't make much of an impression as an actor, but if we are being remotely honest, neither did Walker. If anything, Eastwood is less stilted, and he's probably only coming across as slightly effeminate in comparison to his Dad. Michelle Rodriguez continues to have the most thankless job in the movies, being asked to sell the "dramatic" or "romantic" moments (a.k.a daytime soap plotlines) and it's hard to know whether to laugh at her, admire her or pity her for this role.

The Fate of The Furious certainly marks the beginning of blockbuster season, and it's a nice appetizer, but one can only hope that there is something coming in the main course that we have not sampled so many times before.