Movie Review: "Five Came Back" Is a Gripping and Fascinating Documentary 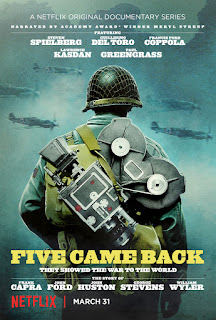 For anyone with an interest in both history and cinema, the new three-part Netflix documentary Five Came Back is required viewing. Director Laurent Bouzreau's film tells the stories of five legendary filmmakers - John Ford, Frank Capra, John Huston, George Stevens and William Wyler - who interrupted their successful Hollywood careers to make propaganda films for the U.S. war effort in World War II. While the story is told in narration by Meryl Streep, and some archival interview footage of some of the directors is included, much of the insight comes in interviews with five contemporacontemporary filmmakers, each assigned to ome of the five legenda: Steven Spielberg  (Wyler), Paul Greengrass  (Ford), Francis Coppola (Huston), Guillermo Del Toro (Capra) and Lawrence Kasdan (Stevens). While the contemporary filmmakers focus on their subjects and talk little about thems elves or their own work, from a film buff'S perspective one of the most interesting aspects of the series is the insight their perspectives on the old filmmaker's work provides on their own. The subjects are well-matched, as each has either a cinematic or personal similarity to their assigned director (and in some cases both.).  Consequently, we come out of the series feeling we know, for example, Ford better than we did before, but also Greengrass. Hearing Greengrass talk about the reality the shaky camera work and other techniques bring to Ford's Battle of Midway documentary can't help but bring to mind his own signature style. 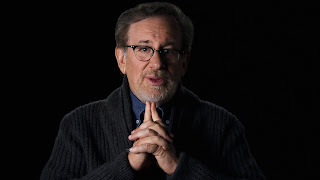 The stories are all compelling, and in some cases harrowing. These were not just pampered  Hollywood types selling a war they weren't experiencing: From Ford at Midway and D-Day to Wyler bring on board the Memphis Belle B-17 bomber to Stevens' presence at the liberation of Dachau, these filmmakers were there for many of the most pivotal and dangerous moments. As would be expected, the story of Stevens at Dachau is among the most riveting and emotional, and the footage is difficult to watch, as is the footage of post-bomb Hiroshima.

With a film that moves back and forth from five subjects it would be easy to lose focus, but Bouzreau never does, keeping his narrative clear and easy to follow. The simple, straight forward narration is extremely helpful, and Steep's low key but soulful reading is perfect. She never becomes indulgent or tries to accentuate the drama, but also never seems half-hearted or perfunctory.   This feminine presence provides a nice counterbalance an emotional resonance to the film.

While the modern filmmakers are clearly respectful to the point of awe of their subjects, they don't whitewash or pull punches about character flaws like Ford's competitiveness or occasional pettiness, or more major issues like the racist portrayal of the Japanese in films like Capra's Know Your Enemy: Japan. This honesty makes the film both more compelling and more palpable real.

Bouzreau has done excellent work over the years documenting the work of other filmmakers (in particular Spielberg), but Five Came Back is his masterpiece. It's an excellent piece of documentary feeling that's as entertaining as it is informative.