By Paul Gibbs April 23, 2017
When I first year two years ago that Steven Spielberg had directed a science fiction TV movie called L.A. 2017, I was puzzled. How could I not know about this?  I pride myself on my extensive knowledge of Spielberg's work, and even on the relative completeness of my personal collection (when people try to catch me by asking if the collection includes Duel, I smirk and reply it even includes the far lesser known Something Evil.). How could i not be aware of this one? I soon discovered that in a way I was aware: I knew Spielberg had directed an episode of the series The Name of the Game. I was not aware that this was a forerunner of the rotating movie series that would be popularized with mystery shows like Columbo. The Name of the Game consisted of 90-minute episodes rotating between three central characters working for Howard Publications, a large magazine publishing company (why anyone would consider this an interesting or promising concept for a series still puzzles me), and L.A. 2017 was one of these. It represented Spielberg's first feature-length project (running 76 minutes without commercials), and due to its science fiction premise was more of a stand alone movie than most episodes. Spielberg doesn't officially include it among his feature films, but it's certainly an intriguing curiosity for fans, especially now that it takes place in our present. It's the first professional foray into science fiction for the filmmaker who would later give us Close Encounters of The Third Kind, E.T., Minority Report and others. On finally seeing it, I wasn't surprised to see that it doesn't hold a candle to Duel, but still offers some interesting glimpses of Spielberg's then unrefined talent.


L.A. 2017 centers on Glenn Howard, the publisher of Howard Publications. Glenn is played by Gene Barry (who would later cameo in Spielberg's War of the Worlds, though that was a reference to his appearance in the classic George Pal film, not this), and was portrayed as a sophisticated playboy who was occasionally given the more offbeat stories on the show, though this was certainly his most outrageous exploit. In fact, L.A. 2017 is far enough out there compared to the standard episode that in order to fit into the series writer Phillip Wylie was forced to resort to the lamest and most over-milked of dramatic copouts: "It was all a dream . . . Or was it?".  While dictating a report on an environmental conference, Howard gets dizzy and drives off the rode, then wakes up in the Los Angeles of 2017, where pollution and environmental irresponsibility have driven the portion of humanity that has survived underground, and what passes for America now is run by corporate totalitarians (so that part of 2017 they got right.). While the younger generation that never experienced the good old above ground days of freedom has adjusted fine to this post apocalyptic society, their elders have a harder time and are less trusting of their corporate government. That's where Glenn Howard comes in: The government wants him to bring back Howard Publications, a name the older folks remember and trust, and use it to spread their propaganda.

There are some intriguing ideas at play here (more in the area of dystopic future sci-fi than time travel, where it's seriously underdeveloped), but the story doesn't entirely hold together and is hampered by being far too oriented around scenes of characters sitting around reciting exposition.. And while the budget was high for a television series of its day, it apparently wasn't enough to provide and kind of interesting or futuristic production design: aside a sequence in a electronic "chapel" and one or two others like it, nearly everything on screen looks more or less like any other television drama made in 1971, and that's to the detriment of the film .Regardless of the fact that this society went underground in 1989 and they should have been able to recognize that styles would evolve somewhat in 18 years, it's simply not aesthetically interesting. The cast is adequate, thought largely stilted and not especially engaging. 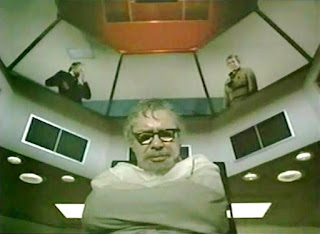 As a whole, L.A. 2017 is far more interesting as a glimpse at proto Spielberg than it is as a work in its own right, but both in story and in its direction there are flashes of great potential. Spielberg impresses with some highly inventive staging  and shot selection, including a dolly shot that follows one subject just to take us to another three times in one scene, and shakicam uphill run that foreshadows moments from Saving Private Ryan.  I was left imagining what the Spielberg of today would be able to with a reworked version of this concept. Just think of the director of Minority Report taking on a futuristic dystopian thriller based on themes of ecological responsibility and corporate greed. But for fans, the version of L.A. 2017 does exist is another fascinating (if not fully realized) glimpse at the early development of a cinematic master.