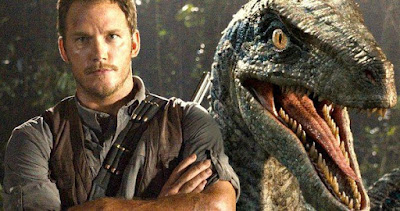 Chris Pratt is a busy guy.  Not only is he currently shooting Jurassic World 2 but he's also doing the promotion circuit for Marvel's highly anticipated Guardians of the Galaxy Vol. 2.  While he was speaking to Screen Rant the subject briefly changed from the Guardians sequel to another sequel, Jurassic World 2 and its director.

"Aw man, J.A. Bayona? Do you know that filmmaker? He's a remarkable filmmaker. If you haven't seen The Impossible or A Monster Calls, I mean he's really visually masterful. Deep emotions and suspense. I think it's going to be a scarier version. A little bit darker and will continue to expand and carry the story forward in a way that is really unexpected and you wouldn't have imagined."

Jurassic World 2 is currently being filmed in the UK and other locations and will have a returning cast of Chris Pratt, Bryce Dallas Howard and B.D. Wong.  New cast members include Toby Jones, Rafe Spall, Daniella Pineda, James Cromwell, Geraldine Chaplin and Ted Levine.