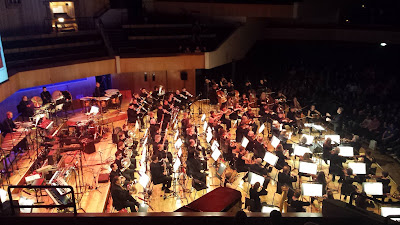 Last night I was lucky enough to watch the BBC National Orchestra of Wales perform at St David's Hall in Cardiff, Wales.  The theme of the evening was sci-fi classics and I, along with the packed crowd were treated to some of the finest renditions of the most iconic soundtracks.  Star Trek, The Wrath of Khan, Star Wars, The Empire Strikes Back, Doctor Who, E.T, and Close Encounters were all represented to name a few.  The BBC National Orchestra of Wales were flawless throughout as they were conducted by Edwin Outwater.  Another added treat was each performance was introduced by Robert Llewellyn who is famous for playing Kryten in BBC's Red Dwarf.

John Williams was well represented during the evening with renditions from E.T, Close Encounters, A New Hope, The Empire Strikes Back and The Force Awakens.  I've put together a montage of some of the performances and you can watch that below along with the full video of Close Encounters.


Full rendition of Close Encounters of the Third Kind