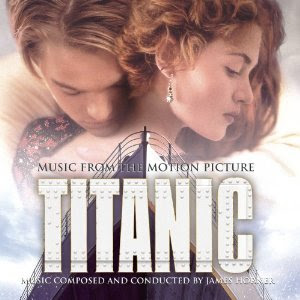 That classic, Oscar-winning score has today been named Britain’s favourite movie soundtrack of all time.

A poll, commissioned by the Royal Albert Hall as part of its celebration of Great Escape composer Elmer Bernstein, being staged in June, asked 2,000 respondents to choose their favourite film score. Titanic topped the charts beating out the likes of Chariots of Fire, Star Wars, Harry Potter and the Philosopher’s Stone and The Lord of the Rings, to scoop the top spot.

The film got the full Royal Albert Hall treatment last night, with two sell-out, 20th anniversary-screenings in high-definition, featuring James Horner’s classic score played live and in full by the Royal Philharmonic Concert Orchestra. It received a record-equalling 11 Oscars in 1998, including gongs for Best Score and Best Song.

John Williams is also well represented with three entries in the top ten.

1. Titanic
2. Chariots of Fire
3. Star Wars
4. Harry Potter and the Philosopher’s Stone
5. The Lord of the Rings Trilogy
6. The Great Escape
7. The Magnificent Seven
8. Back to the Future
9. Gladiator
10. Jurassic Park

In addition the survey asked the 2,000 respondents to reveal what music scores mean to them, and how important soundtracks are to films.

The research revealed that 20 per cent of Brits will tolerate a film they dislike, if they love the music. Equally, 59 per cent of the nation thinks a bad musical score can completely ruin a film.

A third (33 per cent) of Brits agree that music is their favourite part of a film, with a dramatic score being the nation’s preferred style for almost half (46 per cent).

Lucy Noble, Artistic Director at the Royal Albert Hall, said: “You never forget a great film score: from the epic to the intimate, movie music has an unparalleled ability to evoke emotion. We asked film fans to pick their favourite, and there’s no doubt about the winner: James Horner’s sumptuous, heartbreaking score for Titanic.

Noble continued: “It’s great to see the love for The Magnificent Seven and The Great Escape, two classics that will feature in our unique celebration of Elmer Bernstein’s life and legacy, hosted by movie legend John Landis.”