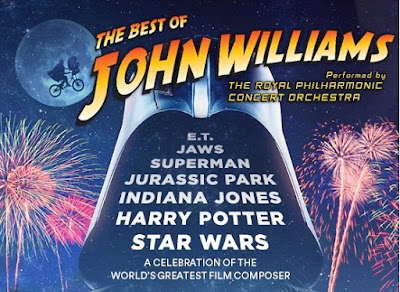 Get your diaries out because this one is going to be a must if you live in the UK.  Nocturne Live presents The Best of John Williams and it's being played at Blenheim Palace this June.

Sit back and enjoy a journey through blockbuster movie history, set within the stunning surroundings of Blenheim Palace’s Great Court in Oxfordshire. The Best of John Williams is a celebration of the greatest film composer of all time. Having written scores for more than 100 films, Williams, who turned 85 this month, is a 22-time Grammy winner who has been nominated for 50 Academy Awards over the course of an illustrious career spanning more than five decades.

Performed by the 70-piece Royal Philharmonic Concert Orchestra and conducted by Robert Ziegler, this concert will feature an array of Williams’ work with music from all of his most famous film scores including Harry Potter, Indiana Jones, E.T., Jurassic Park, Schindler’s List and a spectacular Star Wars finale.

Here's the link to book your tickets.  If you do go, feel free to send us your pictures and we'll post them on here.