Movie Review: MILD SPOILERS: "Life" May Be Worth Living, But It's Not Worth Watching 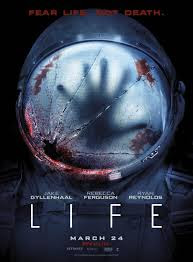 Space movies are back, and we're not just talkig about Star Wars, or even Guardians of the Galaxy. Ever since Alfonso Cuaron's Gravity set the box office on fire (or would have if fire could burn in space, which it cannot, despite what Star Wars might say), astronauts have been in vogue, with movies such as Interstellar and The Martian. People seem to be interested in reaching for the stars again, if not on a launch pad, at least in a darkened theatre.  We've seen the interest wane as the quality drops (think The Space Between Us). so it's hard to say how much longer it will last. But it was, of course, inevitable that at some point this trend would lead to amother painful remake of Alien, but actually watching it happen, and watching a strong cast and top notch production values being wasted on it, is genuinely infuriating. 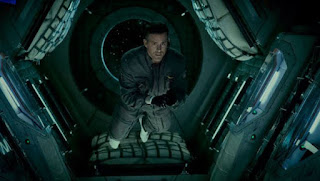 Life follows the crew of the International Space Station, who capture a probe returning from the red planet with a sample inside. Upon further study, the speicimen indeed proves to be the first proof of extraterrestrial life, in the form of a wibbly wobbly mass that intitally looks like pink astroturf. The astronauts rejoice at the discovery, with Dr. Hugh Derry, the token black and token Brit (they have limited space up there, so they killed two birds with one stone) in charge of studying it, while Dr. Miranda North (Rebecca Fergusson) is in charge of looking dour and mysterious to indicate she knows something the others don't. Rory Adams (Ryan Reynolds) is in charging of providing Ryan Reynoldsesque soundbites, and Dr. David Jordan (Jake Gyllenhaal) is in charge of being the nominal lead, while the remaining crew members are Japanese and Russian.

The citizens of earth rejoice at the news, and an Elementary school from America wins the enviable right to name the alien, which they dub "Calvin", after their school. But when an accident renders Calvin unresposive, Dr. Derry (Ariyon Bakare) decides to "stimulate" Calvin. This does not go well.

From there, it's just Alien all the ways, with the threatened and Calvin breaking free, and growing in size and hostility. Calvin squiges, squadges and squdges through the station, picking off the crew one by one. We kept waiting for the moment when the terrible Calvin, mighty and fearsome, would be trying to rip someone apart and we'd hear "Calvin! Stop breaking all of your toys" and the action would switch to a bedroom where a little boy and his stuffed tiger complained that Mom never lets them have any fun. 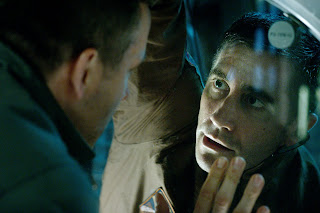 The strong cast is horribly wasted, with Gyllenhall fairing best of the leads, giving some nuance to a potentially intersting but underdeveloped character (his reading of "Goodnight, Moon" is by far the best thing in this film.). Reynolds is solid, and adds a likable and humorous presence, but it's a one note part even for him.  He is reaching a problem point in his career, in that he has usually played "the Ryan Reynolds character", which has worked out ok, but now it is officially the Deadpool character. From now on, whenever he is on screen scracking wise, it feels like Deadpool suddenly showed up in another movie. It's just not going to work. He's going to have to give more against type performances (like The Women in Gold) if he wants to have a career outside of the Merc with the Mouth (admittedly, these are the kind of problems you want to have.). Fergusson, who made such an impression in Mission Impossible: Rogue Nation, is really quite dull, and Hiroyuki Sanada (The Last Samurai, Mr. Holmes) provides the most emotional heft, but his plot is frankly becoming a tired and tacky fixture of horror/monster movies.

The plot holes and scientfic eyeroll moments abound (does Calvin require oxygen, or can he move around outisde the ship? which is it?), and the "How stupid are these people?" monents are even more prevalent. And while director Daniel Espinoza does a capable job of building suspense, there is just such a feeling of "been there, done that" as to render any skill in filmaking moot. For anyone complaining about disney remakes and slightly derivitive Star Wars sequels, we would argue that this kind of cheap ripoff of an established property (albiet under a different name) is far less original than, say, Pete's Dragon. We'd rather have high quality soft remakes that show respect for the original by standing on their own than this kind of shameless rehash. Admittedly, this plays all the worse coming on the heels of Arrival, but even without thst comparison it doesn't hold up.

Life is strictly for the easily pleased horror fan (and if you are seeing it  because you just love Ryan Reynolds, and you think you'll enjoy it regardless because of him, all we will say is: take a look at the fact that he has lower billing than Rebecca Fergusson, who is hardly a household name, and think about what that might mean in a horror movie.).