Movie Review: "Kong: Skull Island" Is a Fun B Movie with Unevolved Characters 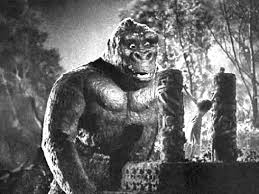 Marion C. Cooper's classic adventure King Kong changed the face of cinema, providing thrills like nothing audiences had ever seen before. Peter Jackson's 2005 remake, while perhaps a bit too long, was still a triumphant homage that actually improved on the original in terms of character development and emotional heft (if you weren't moved by the ice skating scene or by the great ape's tragic fall from the Empire State Building, it may be time to see the Wizard about getting a heart.).  But in between those two versions, there have been many other films featuring the 8th Wonder of the World. Forget the 1976 Dino DeLaurentis travesty: we're talking about Song of Kong, Kong Escapes, Godzilla vs. King Kong, King Kong Lives, King Dies, King Kong Reborn, King Kong - Assignment: Miami Beach, etc. These silly B titles are hardly up there with Cooper or Jackson's epics, but for monster movie buffs, they hold a special place in our cinematic hearts. The campy (and sometimes downright dumb) fun is something not to be dismissed for many fans, and the latest film to bear the name of Kong falls decidedly into the category of those films. The movie opens in 1973, just as the Vietnamese War is coming to a close. A mysterious man named Bill Randa (John Goodman) and his plucky young scientist sidekick (Corey Hawkins) want to get to Skull Island, which they contend holds mineral and geological secrets of great scientific importance. All they have to do to get the U.S. government to send them there with a full military exsort is convince them that there's a danger of the Soviets getting there first. Randa is assigned to Col. Preston Packard (Samuel L. Jackson), a gung ho, trigger happy career military man. His team includes pilot Jack Chapman (a bulked up Toby Kebbell), who is constantly writing letters home to his son, and an assortment of other Hollywood war movie types.Randa also goes to Saigon looking for James Conrad(Tomm Hiddleston), who is apparently some sort of soldier of fortune/tracker and jaded ex-something or other who hangs out in dive bars and desperately broods about about whether he will be passed over again as People Magazine's "Enigmatic Bad Ass of the Year." And finally, to offset the testosterone levels a bit, the team is rounded out by an "anti-war photographer" named Mason Weaver (Brie Larson), who may be in a woman in a man's world(we can tells because she has clealy been given the direction "arch you back, it makes you look totally busty" more than a few times), but she is no stranger to danger. 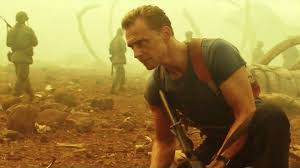 The team sets out for Skull Island, with everyone distrustful of each other, and as we start wondering why the title Viet Kong never ocurred to anyone, and the irony of the fact that the journey in Jackson's film took over an hour, yet this seems to drudge by even more slowly, starts to get genuinely depressing. But once the military helicopters reach the island, no time is wasted in introducing us to the Mighty Kong, and we start getting treated to spectacular action as the soldiers learn the true meaning of gorilla warfare.

The good news is that from this point on, whenever Kong is on screen, the movie is quite entertaining. The bad news is that every time he disappears for any length of time (which is surprisingly often) we are forced back into enduring a talented cast trying, and for the most part failing, to make their cardboard characters even slightly interesting. Hiddelston, generally a charming and engaging actor, is painfully miscast here, to the point where there are several moments when you can practically hear a producer off screen yelling "I know I said I wanted you to get me Loki, but I meant Thor! Do what I mean, not what say!" The only thing more annoying than Jackson's tired "bad mother-effer shtick combined with a cartoonishly obsessed Captain Ahab stars in Apocalypse Now character is the complete waste of John Goodman in a thankless role that may constitute the least intriguing performance of this great actor's career. John C. Reilly fares much better as a Ben Gunn-esque castaway, getting the lion's share of both laughs and heart, and Oscar Winner Larson effectively arches her back a lot. She also fairly convincingly portrays a sense of caring about Kong, though it is more in the way one does for a pet than the kind of intense empathic bond portrayed by Naomi Watts. What we have here a prime example of how bad writing and chauvinism all too often make an Oscar winning actress follow a big step forward with two steps back. Larson is neither miscast or off step, she simply has nothing to work with in this movie. 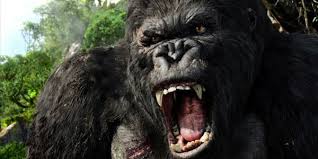 The effects are great, and some of the action is very memorable, especially when Kong is fighting, and you'll laugh, gasp and cheer as he proves he is still the King. The duties of mocap acting for the big guy are split between Terry Notary, who served as movement choreographer for Rise and Dawn of the Planet of the Apes (as well as the dreadful Tim Burton film), and Kebbell, who played the villainous Koba in Dawn. These two guys know how to play an ape, and while they are not given anything like the opportunities Andy Serkis was given to create a deep character, they do a great job at making Kong feel like Kong. 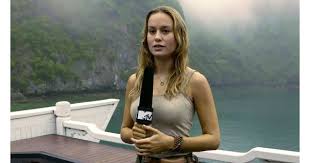 Director Vogt-Roberts has some skill at staging and shooting action, and he has a sense of style (occasionally to a slightly distracting degree), showing himself capable of helming a blockbuster (if never reaching the levels of artistry in shot compisition and tension building thay Gareth Edwards did in Godzilla.).  The shortcomings seem more due to the script, which gives us a thin story and even thinner characters. Yes, that's to be expected in a monster movie, but in, for example, any of the Jurassic Park films you at least got to know the characters in broad strokes through decorative character quirks. Here the larger the role, the less filled in it is, with Hiddleston stuck playing a character without a single discernable personality trait other than being amazing in a fight, hardly something that makes him stand out as a Hollywood action hero. And the post-Vietnam war setting adds a touch of atmosphere, but it ranges from feeling irrelevant to being in somewhat questionable taste.

Still, there is definitely fun to be had. This is strictly a low expectations, turn off your brain piece of entertainment, but it works very well most of the time on that level, and there's a lot to be said for that. If you are attached to the legendary beast, it's a must see. And as this is very much intended to go together with Godzilla as part of Warner and Legendary Pictures attempt at a Marvel style shared universe, we strongly suggest staying until the credits are over.