Movie Review: "Ghost In the Shell" is Visually Pleasing But Still Underwhelming 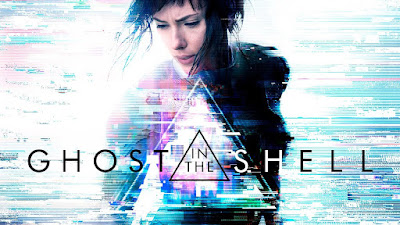 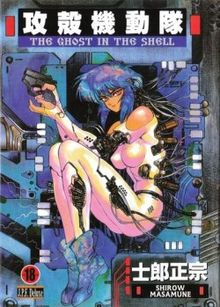 Masamue Shirow's revered, visionary manga series Ghost in the Shell has rabid fans all over the world. and was cited by the Wachowski's as a heavy influence on The Matrix. The 1995 film version, directed by Mamoru Oshii, is considered a classic as well, so there's a lot to live up to with an American remake, and the backlash started some time ago with the casting of Scarlett Johnasson in the lead role. Fans argued that the character of The Major, also known as "Motoko Kusanagi" is Japanese, not American. But it's important to point out that in Japan, the backlash is virtually non existant, as people expected an American version to star an American actress, and Oshii himself has stated that "The Major is a Cyborg and her physical form is an entirely assumed one. The name "Motoko Kusanagi" and her current body are not her original name and body, so there is no bassis for saying that an asian actress must portray her." In addition, let's be honest, as is often the case with this kind of anime, the original was full of vaguely defined ethnicity of characters, featuring plenty of white looking people with asian names. It's a staple of the genre, for Pete's sake (though Pete himself could not be reached for comment.). So there: you do not need to be freaking out over the casting. If there's anything you should consider freaking out about, it's the choice of Rupert Sanders to direct. His only major credit prior to Ghost in the Shell was Snow White and The Hunstman. There are certainly far worse directors out there. but Sanders name was not exactly a selling point for us. 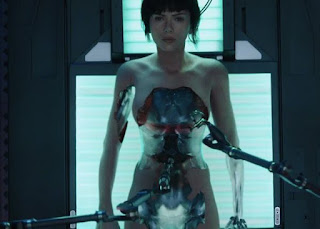 The story takes place in a future where cybernetic enhancement is increasingly common, and rapidly evolving technology is changing everything about the world. The Major (Johansson), is a cybernetic/human hybrid (is this case, a robot with a human brain) who works for a counter cyber-terrorist organization called Section 9. She once had a life, and parents, and the vague memory she still possesses of them being killed by terrorists, combined with her programming, is what drives her. Along with her partner, Batou (Pilou Asbaek), she investigates a series of assaasinations, until eventually her investigation leads her to questions and answers that are not adding up, and the search for truth starts to lead her down an altogether different path. 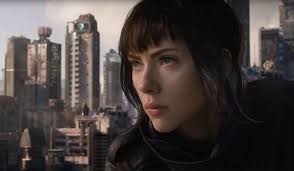 The plot here deviates wildly from the 1995 version, incorporating elements of the sequels, as well as the series, and eventually trying to mesh it all together into a new story. It's very hit and miss (whenever you are able to mix dumbed down with difficult to follow, you know you have a problem) and at times the result is really a bit of a mess. But when it does work, it's engaging, entertaining and just barely smart enough to be quite watchable, even if the sluggish pacing makes it feel longer than its 106 minute run time. The action is fairly enjoyable, if not particularly memorable, failing to provide anything new, and the philosophical pondering is thoughtful, if sometimes a bit too on the nose.

Johansson does very well with the role, mixing a mechanical stoicism with the feeling of a haunted soul, but the standout is unquestionably Michael Carmen Pitt, who makes such a huge impression in his limited screen time (especially considering that he is working with a character that feels largely recycled from Rutger Hauer's Roy Batty in Blade Runner) that he nearly steals the entire movie. Juliet Binoche, as Dr. Oulet, the scientist who brought Major to life, is effectively maternal and mysterious at the same time, giving her all to the performance. Binoche is a great "assistant storyteller" actress, and it's very nice to see her in a major film again. The rest of the cast doesn't do much to stand out either way.

Director Sanders struggles with the difficult task of taking very edgy and adult (if not always mature) material, loaded with constant nudity and graphic violence, and toning it down to be suitable for mass audiences. The decision to make Major's robotic body less defined and overtly sexualized is a good one, or at least it would be if they stuck to it. Exactly how much flesh Major has seems to vary from scene to scene, and questions like "why does she needs a wetsuit?" or "why does she wear panties when she's alone?" become frustrating (although the answer to the latter is simply that Sanders thinks he is being clever by making a visual reference to Lost in Transliteration. He's not.).

Ghost in the Shell is a movie that is going for thought provoking but depends heavily on asking you not to think too much, and to some extent that is ok. The philosophical themes and the questions about the nature of being are more important than the accuracy of the science. It's a beautifully stylish film that borrows heavily from both A.I. and Minority Report, but never quite captures the film noir atmosphere it's going for, and that's a shame. It's a serviceable enough Hollywood spectacle with some interesting questions, and it's worth a look, but it's unlikely to be remembered or earn much of a place in cinema history. It's going to play best to fans, and worst to rabid purist fans.