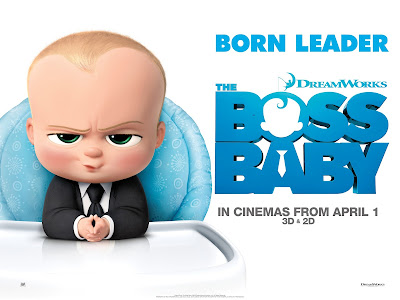 “Choo Choo on that!” - The Boss Baby (Alec Baldwin)
In eager anticipation of the upcoming release of THE BOSS BABY, a brand new clip has been released by Twentieth Century Fox and DreamWorks Animation.
Featuring the voice talents of Alec Baldwin, Steve Buscemi, Jimmy Kimmel and Lisa Kudrow and from the director of Madagascar, THE BOSS BABY is due to arrive in cinemas from April 1.


DreamWorks Animation and the director of Madagascar invite you to meet a most unusual baby. He wears a suit, speaks with the voice and wit of Alec Baldwin, and stars in the animated comedy, DreamWorks’ The Boss Baby. The Boss Baby is a hilariously universal story about how a new baby's arrival impacts a family, told from the point of view of a delightfully unreliable narrator, a wildly imaginative 7 year old named Tim. With a sly, heart-filled message about the importance of family, DreamWorks' The Boss Baby is an authentic and broadly appealing original comedy for all ages.