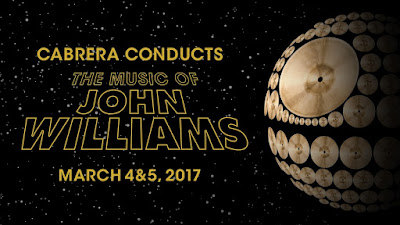 A long time ago in a galaxy far, far away…

The Las Vegas Philharmonic presents Cabrera Conducts The Music of John Williams on Saturday, March 4th at 7:30 p.m. and Sunday, March 5th at 2:00 p.m. in Reynolds Hall at The Smith Center featuring our choir-in-residence, The Las Vegas Master Singers.  Patrons are encouraged to come early and dress in their favorite John Williams soundtrack movie character for special galactic surprises in Reynolds Hall lobby.  Music Director Donato Cabrera will host a pre-concert conversation at 6:30 p.m. on Saturday evening and at 1:00 p.m. on Sunday afternoon for patrons to learn more about John Williams and the music behind these iconic films.

The orchestra will perform selections from 10 films, including Jaws, Superman, Harry Potter and the Sorcerer’s Stone, Schindler’s List, Universal Picture E.T. (The Extra-Terrestrial), The Cowboys, Saving Private Ryan, and Star Wars Episodes I, III, and IV.   The Las Vegas Master Singers, under the direction of David Weiller, will accompany the orchestra on the Hymn to the Fallen from Saving Private Ryan, Battle of the Heroes from Star Wars Episode III: Revenge of the Sith and Duel of the Fates from The Phantom Menace: Suite for Orchestra.

The concert will open with the Olympic Fanfare and Theme, commissioned by the Los Angeles Olympic Organizing Committee and premiered by Williams for the Summer Games in 1984.   Next, the orchestra will perform the Suite from the 1975 suspense thriller, Jaws followed by selections based on two of our favorite fictional heroes - the Superman March from Superman and Harry’s Wondrous World from Harry Potter and the Sorcerer’s Stone.  On a more somber note, the Philharmonic presents the Theme from Schindler’s List and Hymn to the Fallen from Saving Private Ryan followed by the award-winning Adventures on Earth from the Universal Picture E.T. and the Overture from The Cowboys.

To conclude the program, the Philharmonic performs several works from the Star Wars franchise including Princess Leia's Theme from Star Wars Suite, Battle of the Heroes from Star Wars Episode III: Revenge of the Sith, Duel of the Fates from The Phantom Menace: Suite for Orchestra, Main Title from Star Wars Suite and Imperial March from Star Wars Suite. The music from the original 1977 film won an Academy, Golden Globe, BAFTA and Grammy award, establishing Williams as one of Hollywood’s and America’s leading composers.

About the Las Vegas Philharmonic
The Las Vegas Philharmonic, led by Music Director, Donato Cabrera, established its presence in Southern Nevada in 1998. The mission of the organization is to perform music that enriches and educates, helping to build a vibrant, culturally rich community.  A proud resident company of The Smith Center for the Performing Arts, the Las Vegas Philharmonic brings a valued cultural dimension to the city, providing over 19,000 children each year with vital access to a music education program and showcasing local talents alongside stellar nationally and internationally known guest artists on the magnificent Reynolds Hall stage.  At the orchestra’s core are 76 contracted professional musicians, many of whom are esteemed educators who also perform in other professional productions in Las Vegas, bringing depth and variety to the organization.

As a 501(c)(3) organization, the Philharmonic’s community, education and artistic programs are made possible by the generous donations and support of individuals and corporations.  To join us in our mission or learn more, visit lvphil.org  or call 702.258.5438.