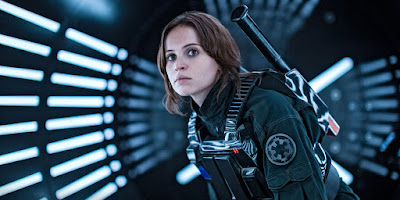 Stars of the Saga Ian McDiarmid and Jeremy Bulloch Join the Lineup
Felicity Jones leads a galaxy of talent scheduled to appear at the Star Wars Celebration Autograph Hall this April. The star of Rogue One: A Star Wars Story will sign autographs at the premier Star Wars fan event, The Topps Company and Authenticators, Inc. announced today.
Topps and Authenticators, Inc., the official autograph providers for the event, will host thousands of Star Wars fans from around the world at the Star Wars Celebration Autograph Hall in Orlando, Fla., from April 13-16. Fans can purchase authentic movie photos and officially licensed Star Wars memorabilia to get signed at the autograph pavilion as part of the StarWarsAuthentics.com launch.
“Having Felicity Jones at Star Wars Celebration to meet all the amazing Star Wars fans is important to us,” said David Leiner General Manager and Vice President of Topps North American Sports and Entertainment. “She’s become an integral part of the Star Wars universe and was immediately loved by fans around the world. We are proud to have her in our first group of announced guests.”
Ian McDiarmid, who portrayed the sinister Emperor Palpatine, and Jeremy Bulloch, everyone’s favorite bounty hunter, Boba Fett, join Felicity as the first in a long lineup up of talent from the iconic franchise scheduled to sign autographs for fans at the show.
Topps, Lucasfilm and Authenticators Inc., the industry standard verification service originally built by the MLB Authentication Program, recently announced a new collaboration,StarWarsAuthentics.com, a one-stop online destination for Star Wars fans to easily and securely order all of their official photo and autograph needs. StarWarsAuthentics.com includes a vast library of images direct from Lucasfilm, high-quality photos and exclusive autographs of fans’ favorite stars, printed using Topps’ technology.
Star Wars fans get officially licensed movie and authentic autographed photos at StarWarsAuthentics.com, which include more than a dozen options of Jones to choose from. In addition to Jones, Rogue One’s Forest Whitaker, Riz Ahmed and Donnie Yen autographs are available at the website, which also is the only place to find the first official dual-signed items of John Boyega and Daisy Ridley.
Stay tuned for Star Wars Celebration pre-order details and the announcements of additional signers that will be at the event.